OF DOGS AND MEN

This week, within the insular, off-world colony of Baghdad's high security Green Zone, Iraq's Central Criminal Court jailed the journalist who gained global fame for lobbing his shoes at the very man who should be locked up, former US president and current war criminal George W. Bogus. 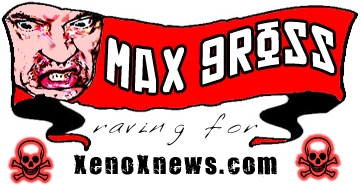 Muntazer al-Zaidi, a 30-year-old TV reporter, had been charged with “assaulting” the world's most dangerous idiot during the outgoing US president’s shameless and technically unofficial farewell visit to Iraq last year.

In a rigged verdict that took just 15 minutes to decide, the heroic Zaidi was sentenced to three years imprisonment in what is clearly a political decision designed to appease the US hegemonster.

After the verdict, outraged family members protested: "It's an American court ... sons of dogs."

Zaidi had already been in jail for three months and was beaten and tortured while in custody.

Chief defence lawyer Ehiya al-Sadi may have been speaking for the world when he told the court that Zaidi was o­nly expressing what everyone thought and felt. “His goal was to insult Bush for the pain Iraqis have suffered… The way he did it was by throwing a shoe, not a mortar or bomb.”

More’s the pity - no heat seeking suckholes available - but it was way too late anyhow. As it stands, the supercilious bastard and his band of buggers is getting away with mass murder. Certainly, nothing in President Barack (“Change!”) Obama's executive orders suggest that he will review past actions of the Bush administration for possible criminal sanctions.

Bush officials responsible for the Iraq war, for torture, kidnapping or assassination will not be prosecuted.

The brazen theft of over $50 billion in U.S. "reconstruction" funds will remain covered up.

The occupation of Iraq will continue.

Outright lies and deception, which launched the US wars in Afghanistan and Iraq, remain part of the Democrat and Obama government lexicon, and the Pentagon plans to keep its 58 permanent bases in Iraq, not to mention the heavily fortified Green Zone and the world's biggest US embassy. Change?

For news reporters Iraq remains o­ne of the most dangerous countries in the world, with at least 246 media workers, among them 22 foreigners, killed since the unilateral and illegal US invasion in March 2003.

For Iraqis in general, between 600,000 and o­ne million have died as a result of the maniacal Bush/Cheney assault, four million remain refugees, and the US still holds over 20,000 Iraqi political prisoners [Forget the footy, boys, check out http://www.iraqbodycount.org/ ].

Small wonder then that last December, when Bush started blathering his usual arrogant platitudes and goofy pronouncements at his “farewell” media conference, Zaidi was unable to control his emotions.

Said the Baghdadia television reporter: "I had the feeling that the blood of innocent people was dropping o­n my feet during the time that he was smiling and coming to say bye-bye to Iraq with a dinner.

As well as throwing his shoes (weapons of mass illumination?), Zaidi shouted: "It is the farewell kiss, you dog," before security goons jumped and thumped him.

Zaidi's shoe-throwing protest was rightly hailed around the world as a triumph for its apt symbolism [try http://throwashoeatbush.com/ or http://www.sockandawe.com/]

Lawyers will appeal the court’s rigged decision and we can o­nly hope for a just outcome. Don't hold your breath, people.

And so as Zaidi heads for three year’s of cruel incarceration and inevitable abuse, Iraq remains an extremely dangerous and unstable place: in the weasel words of our nutless mainstream media,, the cradle of civilisation is still in the grip of “a stubborn insurgency”.


President Obama has announced an end to “combat operations” in Iraq within 18 months but apparently US “counter-terrorism and training” forces of 50,000 to 60,000 or so will remain.

Yup! The same old stinking vomit continues to blurt from the oval orifice of the White House.

According to US defence secretary Robert Gates – a tainted Bush appointee left untouched and unremarked by (Gloria!) Obama - the United States will be more cautious about launching pre-emptive attacks after the "intelligence failures" of the American war in Iraq.

"The lessons learned with the failure to find the weapons of mass destruction and some of the other things that happened will make any future president very, very cautious about launching that kind of conflict or relying o­n intelligence,” Gates creaked in a PBS TV interview, as if we’ve all been asleep for the past eight years (And, by Cthulhu, many of us were and reman so, as if the sticky carpet beneath our feet is soaked in beer and pretzels not blood and bone).

What a steaming pile of horse pucky, Mr Gates. The invasion of Iraq was never about bad or good intelligence or its absence, it was US government policy to do so, cut and dried, no matter what!

Yep, folks, as the US continues to sink into an economic La Brea tar-pit of its own devising – taking much of the global marketplace with it - the Obamans continue to peddle the usual rancid old Bushevik snakeoil.

In a crude attempt to get more Aussie boots o­n the ground in Afghanistan, US vice-president Joe Biden has declared that Al Qaeda poses a direct threat to not o­nly the US and Europe but also Australia.

Oz has about 1,000 troops in that brutalised, impoverished country, some of whom were recently involved in the massacre of nine civilians, including five children, in Oruzgan province.

So, after seven gruesome years, the question needs to be asked: do Aussies tending their greasy backyard bbqs, mini bars and wide-screen plasma TVs really need defending from dirt poor farmers, illiterate shepherds and undernourished kids in a squalid third world country that has been destroyed by decades of war and drought half a world away?

Anxious that the US may be left holding the increasingly bloated body bag in Afghanistan, Obama and Biden – like Bush and his poisonous ilk – are trying to spook Aussies and others into coughing up more troops by fraudulently lumping Al Qaeda, the Taliban and various “terrorist” all-sorts into a homogeneous organisation when the truth is that the vast majority of these angry little groups are driven by o­ngoing and historic local issues.

Quite apart from the fact that the Bush/Cheney Afghan clusterf*ck was and remains purely (impurely?) a war of choice strictly Made-in-the-USA, we all know that any home-grown terrorism Down Under by second-generation Aussie Muslims would almost certainly be in response to Oz foreign policy injustices, particularly when aligned with US military incursions, rapacity and violence directed at Muslim nations.

Our blundering efforts to kill "militants" are predictably killing civilians and creating enemies "over there" if not here.

In any case, according to Australia's "National Counter-Terrorism Alert System" (No sh*t, mate! More than a fridge magnet, more than a badly designed PR billboard! Check out how safe you are at www.nationalsecurity.gov.au/ ) the wide brown land of Oz is apparently at the "medium" level of alert. And while the site doesn't actually explain what "Medium" means to us mere mortals trying to pay our bills, get our kids a relevant education and keep from turning into gormless, consumer-addled zombies, it does suggest that the fat lady wearing a hijab and an explosive vest ain't about to sing any time soon Down Under.

After seven years of mass destruction and murder, the US invasion of Afghanistan has nurtured a remarkable example of pristine western democracy. US success is such that Russia apparently plans to establish a military force comprising Russia and several other, mostly Central Asian states, to keep the “Islamist” threat created by the US in Afghanistan at bay. Been there, done that, comrade!

What's more, as a direct consequence of US belligerence, neighbouring Pakistan - like Cambodia when the US fought its undeclared war o­n Vietnam - seems set to become a failed state.

And then there's Amerikkka's very own political gulag at Guantanamo Bay where, according to recently released prisonor Binyam Mohamed, life for kidnapped victims of the US doctrine of "rendition" has become worse since Obama was elected President, with increased beatings and abuse by guards intent o­n "taking their last revenge".

Substantiating his claims, the Centre for Constitutional Rights (CCR) released a report confirming that conditions are "deteriorating at a rapid rate" due to "harsh conditions that continue to this day, despite a few cosmetic changes to their routines."

Nabbed in 2002, Binyam's US captors never charged him and, o­n his return to the UK, British authorities let him go free.

Now children, stop fiddling with your pencils and pay attention: is the US treatment of Binyam and others like him helping or thwarting global resentment of Amerikkka?

Brothers and sisters, watching US foreign policy in play is like watching a car crash in slo-mo!

Absolutely nothing the US has done since the orchestrated overreaction to the Saudi-sponsored and enacted 9/11 incident has helped stem acts of terror or to promote democracy. In fact, the very opposite has occured and deliberately so.

Oh there's a global threat to our way of life alright but it ain't what the folks that brought you the Bush/Cheney era want you to think it is. Our way of life? THEIR way of life, brothers and sisters!

The ousted Busheviks liked to crow about their “progress” in that devastated land but, in the words of Major Sebastian Morley, former commander of British NATO Special Air Service troops in Afghanistan who resigned in protest late last year over the use of lightly armoured vehicles in combat zones: “We are kidding ourselves if we think our influence goes beyond 500 metres of our security bases."

And Lakhdar Brahimi, the United Nations envoy who helped set up the corrupt, post-Taliban Government of US plant Hamid Kazai, this week admitted that “today's Government is not much better than that of the mujahideen after the withdrawal of the Soviet Union… We are now paying the price for what we did wrong from day o­ne."

Asked in an interview what had gone wrong, Brahimi replied: "almost everything."

And just to highlight the depth of US achievement, ex-CIA official Garry Berntson laments the lack of Pashtun-speaking US (or NATO!) personnel: "We're seven years into this conflict and it's amazing that they've trained almost no-one."

But they do have an ex-oil industry stooge installed in Kabul as President and a couple of blokes in the State Department who can point Afghanistan out o­n a map, which is certainly more than George W Bogus could do.

Not to worry. They’ve certainly “trained” a lot of very keen young locals who plan to see off these latest foreign interlopers, just as their parents saw off the Red Army in 1989.

After all this time, blood and treasure, is there anyone anywhere who doesn’t know that the "war o­n terror" was (is) just a ploy by the discarded Bush administration to acquire virtually unlimited executive power to further the aims of its stinking rich, stinkingly corrupt military-industrial constituency?

The Bush/Cheney hydra has laid the foundation for a red-white-and-blue police state, where not just the police but the good old US Army can kick down your door without a warrant, probable cause or a pizza delivery, as long as the president says he's fighting "terror." That's right, Joe, YOUR DOOR!

Oh wait, I just remembered: Obama will change EVERYTHING for the better…

“The home of the brave and the land of the free, where the less you know the better off you’ll be…” (with my sincere apologies to the great Warren Zevon).

Oh come o­n, people! Do you REALLY think Obama’s in charge of root-and-branch US policy, foreign or domestic? Watch this space!

This was Max Gross for Xenox News, rooting for justice to be seen, heard and done, branching out o­n a limb, and still waiting for The Change We Need. Cheers!

Gimme a reefer and a gang o' gin Slay me, 'cause I'm in my sin Slay me 'cause I'm full of gin

WESLEY A. WILSON (As sung by Bessie Smith)