More than a month after the U.S. Congress approved the 700-billion-dollar so-called bailout fund, the global economy sinks deeper into recession, struggling U.S. homeowners are left abandoned and the demented U.S. President Bush continues to praise the discredited (pun unintended) free market system in which his administration let the rabid Wall Street dogs off the leash. By the end of 2009, 3 million families are expected to have lost their homes and 2.3 million more cast adrift as Bush’s faultless free markets vote in precisely the opposite way that Americans have just voted. And the most dangerous idiot in the world has still two months to spout his self-serving drivel, loot the national treasury and confirm that Osama Bin Forgotten is his chief policy adviser, since Bush has done more damage to America than any terrorist could ever have imagined.
Bush Sells Free Market as Cure-All, Despite Crash
By Matthew Rothschild
First published on Saturday, November 15, 2008 by The Progressive

On Thursday, Bush gave a speech in New York about the financial crisis, and it was a laughable ode to the free market.

It sure was an odd time for such an ode, since the free market is crashing down upon us.

Ever incoherent, Bush himself admitted as much.

"I'm a market-oriented guy, but not when I'm faced with the prospect of a global meltdown," he said.

And so he enumerated the market interventions that his administration has already taken. He talked about the need to "make our financial markets more transparent"- though his bailout is anything but. And he even called for more regulation.

But then he went back to singing his ode.

This is economic idiocy at a time of global collapse, and to utter it, Bush had to distort the cause of the collapse, blaming a lot of it on Fannie Mae and Freddie Mac and denying that it was caused by "greed and exploitation" or "a failure of the free market system."

But that's exactly what it was: A failure of cowboy capitalism. Deregulation come a cropper.

Bush can deny it all he wants. But the evidence is right in front of us.

This is what happens when you knock down the wall between commercial banks and other financial institutions, as Bill Clinton and Robert Rubin did by abolishing Glass-Steagall.

This is what happens when you allow Wall Street to issue all sorts of clever derivatives and swaps that are unregulated, as Bill Clinton (with encouragement from Larry Summers) did when he signed Phil Gramm's Commodities Futures Modernization Act.

This is what happens, in short, when you believe in the Reagan-Clinton-Bush ideology that big government is bad and that any regulation is suspect and that the free market will regulate itself.

Hell, even Alan Greenspan has given up on that now.

"If you seek economic growth, if you seek opportunity, if you seek social justice and human dignity, the free market system is the way to go," he said.

Bush is an evangelist for capitalism, but the proof of its miracles has vanished. So he tried to make his case in the negative, by holding up the Soviet Union and Cuba as counter-examples.

He evidently hasn't heard of Scandinavia, which has a much more mixed economy than the United States, and a much more expansive social safety net, with a lot more social justice and human dignity than we have. But the model of democratic socialism, or a tamed free market, doesn't interest him. In his world, there is but predatory capitalism and communism.

Fortunately, the world is passing him by.

Barack Obama has a rare opportunity to lead the United States away from predatory capitalism.

And yes, that means more government involvement in the economy-and in restoring the safety net. It's an economic imperative-and a moral imperative.

Because you can't have social justice and human dignity with mass unemployment, rampant foreclosures, high rates of poverty and food insecurity, and a health care system that leaves almost 50 million people uninsured.

Now Obama must bring in a new team, one that is not in the thrall of the free market. 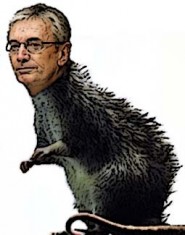 JOHN SPEAKS TO US

It's in the regolith!