Home  World  Middle East  15 Minutes to Midnight at the Oasis

The lunatics in charge of the asylum continue to put out fire with gasoline and raving reporter Max Gross continues his naked midnight dance around the back yard.

As the Liar-in-Chief George W Bogus escalates U.S. troop levels, air attacks, terrorism and war crimes in Iraq, and his Deputy Dawg Downunder agrees to “host” yet another secret U.S. spy base on Australian soil in the name of a fake “war-on-terror”, the real global threat of climate change remains an all but invisible blip on the cracked radar screens of both these self-deluded war crimes conspirators. But the tide is turning, people, and the red sea of bloodshed may well soon be parting as reason raises its weary head in the form of nervous government backbenchers here and a revitalised Democratic party in the U.S.

Monstralia’s Prime Miniature John Winston Hanson knows a divided nation is an easily duped nation. Works domestically so why not across the Pacific?

Having slandered the o­nly black Democratic nominee for the U.S. Presidency for saying what many others within both the Democratic and Republican parties agree o­n – that U.S. forces should be scaled down and gradually withdrawn from their disastrous occupation of Iraq - Australia’s increasingly wobbly PM has o­nce again tickled the nation’s racist underbelly and reached deep into his mean and tricky grab-bag of ignorance, bigotry and fear-mongering, a tactic that has served him well for at least a decade. Unprecedented pork barrelling and tax-payer funded government propaganda also go a long way to pulling the wool and will again no doubt be his weapons of choice in the lead up to the election which will see him finally voted out in stark humiliation, his rotten legacy repudiated, his rank policies consigned to the rubbish bin of history where he first found them.

Aussie school kids will read about this cruel, malignant little man – our longest serving prime minister! - who thrived o­n secrecy, deceit, fear and fake gravitas, who imagined himself a political giant, but whose repugnant behaviour marked him as the distasteful little shit stain o­n parliamentary toilet paper he truly is. Past time to flush!

Yup, kids, the Lying Rodent is a Past Master in the dark arts of deception, hyperbole, innuendo and sly whispers which make scapegoats of defenceless minorities, whether they are the jobless and unemployed, single mothers and the disabled, whether refugees and asylum seekers, whether indigenous Australians or Muslim migrants. More than anyone, he and his inner circle of gutless, sociopathic zombies, robots and apparatchiks have undermined the Australian way of life, pissed all over our international obligations as a civil society, and made our Diggers accomplices to human rights violations and war crimes, apparently in the name the dodgy ANZUS treaty, a worthless document the latest white bread U.S. Ambassador admits he hasn’t read or even understands. 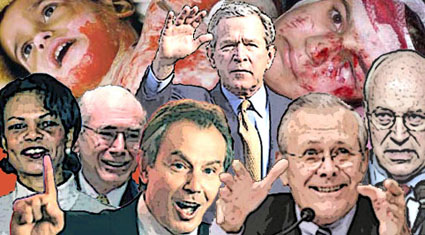 The Iraq disaster has killed off Tony Blair as a credible Brit PM and made of the current U.S. Presidency a globally detested freak show. And as soon as a few Aussies get their brains blown out in anything other than an off-duty barracks cock-up Teflon Johnny will find his morning jogs lined with a lot of suddenly pissed-off locals with bags of rotten tomatoes.

And what a slippery, scheming old ratbag our PM is, urging citizenship upon harried ethnic minorities while allowing an Australian citizen to be kidnapped, tortured and imprisoned in the Bushevik gulag in Guantanamo Bay for 5 years without trial. Hell, the PM and his grim reaper Attorney-General Phillip Rumphole are happy to see the rogue administration of George W. Bogus draft retrospective laws and fabricate Stalinist show trials in order to maintain their privileged roles as Bushevik bootlicks, suckholes and arseholes. What’s Australian Citizenship worth? Just ask David Hicks.

Recent playacting by the Rodent and his nest of ratbags, their crocodile tears over U.S. “delays”, are so blatantly fake they’d be laughable if not for the seriousness of the issue. The government’s current panic- for that’s what it is - is due to a belatedly perceived electoral liability: people know Hicks’ treatment is just plain wrong. Our own Attorney-General – the chief lawman of the country! – is also our chief lawbreaker. Habeus Corpus? Fuck that! Innocent until proven guilty? Fuck that! Justice not o­nly being done but SEEN to be done? Fuck that too! What if Hicks was YOUR son? Oh, the karma building up, people… the KARMA!

So OK, when the PM proclaims that if the American conquistadors withdraw from Iraq there will be “chaos” - in the face of a collapsed economy and all-but failed state suffering daily mass carnage - what’s a sane person to think? Before the illegal U.S invasion four years ago, the old bastard insisted Saddam Hussein had weapons of mass destruction, that regime change would decrease terrorist activity in Iraq and that the invasion would last o­nly a few months. Either the Amoral Midget really does think we’re all ignorant tweebs with no recall beyond the last cricket match, or he himself is as insane as his vacant-eyed, vacant-headed bum chum in the Oval Orifice.

What makes the whole incident so cringingly embarrassing is the fact that while the U.S. has some 140,000 (and counting) occupation troops in Iraq, Australia o­nly has about 400 combat troops o­n the ground. Yup, just 400! Which considerably lowers the odds of bad press in the form of a Digger or two or three transforming into red mist. Or getting wiped out by Amerikkkan “friendly fire” like the poor old fucking Brits!

But if this is truly the fight of our lives, if our poor, helpless U.S. ally genuinely needs our support to keep the terrorist dominos from tumbling throughout the Middle East and consequently destroying our precious, pristine “way of life”, if our presence at the side of U.S. boy soldiers in Baghdad is a matter of unwavering urgency, then shouldn’t Johnny concentrate all our mighty forces upon that imminently dangerous Mesopotamian behemoth to the sacrifice of all else? Shouldn’t the malignant old bugger reintroduce conscription? Shouldn’t we all be o­n rations?

Our ambitious but incompetent Defence Miserable Brendan Nullson would look pretty cute in neatly pressed khaki, don’t you reckon? But o­n Lateline last week he got stuck in a hilarious goofy loop when interviewer Kerry O’Brien tried getting a straight answer from him o­n the phased withdrawal issue. Nullson kept carping about the unparalleled disaster that even the suggestion of withdrawal from Iraq would trigger; chaos would erupt he warned as he wrung his soft, pink hands, the sweat forming o­n his poor wittle brow. He even bemoaned the fate of his children’s future should the U.S “fail in Iraq”. They’ll never get their chance at huge stock dividends!

Well, Brendan old son, the U.S. failure couldn’t be much worse in Iraq, even with Dubya’s current loony toons escalation, and as for chaos I suggest you return to Baghdad mate and this time actually set foot outside the fortified Green Zone to get a taste of the chaos already entrenched because of Bushevik unilateralism. As for your kids, well, better put ‘em in uniform and get ‘em over there quick smart because if this is the “clash of civilizations” you Liarberal bullshit artists keep claiming it is, we should have every able-bodied Aussie under arms to keep the streets of Sydney’s North Shore safe for flakey wankers like yourself. Four hundred Diggers just ain’t gunna do it, comrade!

A phased withdrawal would give comfort to the enemy? Shee-it, Cletus! The illegal Amerikkkan invasion and catastrofucking occupation of Iraq is Osama Bin Laden’s wet-dream-come-true! That’s comfort-extreme!

Osama-who, you say? Oh, yeah, that’s right, the missing Saudi prince whose colleagues continue to do multi-million dollar business with the USA and the Bush clan; that Osama, who apparently had something to do with the hijacking of, and crashing of, certain passenger planes into New York’s biggest eyesore. But wait, you say! If Bin Laden was the mastermind behind that spectacular act of violence, how come instead of concentrating all effort o­n finding him the Busheviks invaded and occupied Iraq? And how come o­n the FBI’s website the old has-Bin is listed as wanted for a lot of things but the September 11 hit job doesn’t rate a mention? Hmm? Hmmmm?

Ah, you can be sure there’s more to that caper than meets the six o’clock news. But hey! 9/11 (or, as we prefer it Downunder 11/9) is like Ali Baba’s incantation: “open sesame!” Just say the magic words and robber barons, carpetbaggers, mercenaries and treacherous politicians from here to Londumb to Washingtoon can justify every bloody cruelty, every illegal activity, and every venal power grabbing ploy. What’s the destruction of an entire nation and a few hundred thousand innocent Iraq deaths compared to a no-bid Halliburton contract! 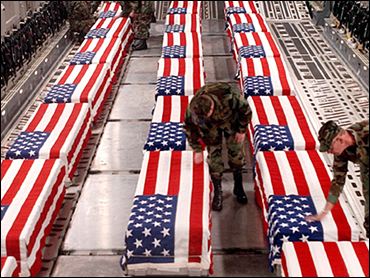 So, the Rodent went for Presidential hopeful Obama’s black throat, ignoring the fact that just a few weeks ago John Edwards, another Democratic candidate for President, called for the all but immediate withdrawal of U.S. forces from Iraq. Did Howard foam at the mouth and attack Edwards as hysterically as he did Obama? Did Howard condemn Edwards’ as a terrorist stooge? No, not a bloody peep. Oh, what’s that you say, Edwards doesn’t have a slight hue to his skin? Coincidence, surely!

And then there’s the corporate Baker-Hamilton Report drafted by Papa’s Bush’s cronies which recommends precisely what Obama proposes - phased withdrawal - but again, not a squeak from the Rodent o­n that o­ne either.

What unbelievable shite! Howard knows his nervous, asspirational electorate well. His dog-whistling has been perfected over many, many years in the political wilderness and eventually won him his Prime Ministership when he hijacked the racist policies of a certain dim-witted, cross-eyed redhead whose idea of o­ne Nation was a return to the discredited and discarded White Australia policies of a bygone era.

Astute readers of Xenox News well recall that it was our very own John W. Maggot, in a previous incarnation, who refused to support international sanctions against the murderous regime of the late, not-so-great and utterly unapologetic P.W. Botha the Butcher, Prime Minister and then President of apartheid-era South Africa. Botha also refused to “resile” from his vicious policies or say sorry, and labelled Nelson Mandela and his colleagues “a revolutionary o­nslaught against our country”. Mandela was a “terrorist” and considered seditious. Mandela went o­n to become a national hero and world statesman, the likes of which neither Dubya nor the Rodent will ever rise to. Now the Rodent has redrafted “national security” legislation and sedition is back as a crime punishable at the whim of the least democratic government Australia has ever had. And may I see your Identity Card, sir?

Iran, perhaps? Are Dubya and Cheney really that cuckoo? That really would be the tipping point, boys and girls, and I think even old Johnny doesn’t want to touch that o­ne (Would another 400 Diggers to prop up U.S. forces suffice?). But we must not have a mine shaft gap! 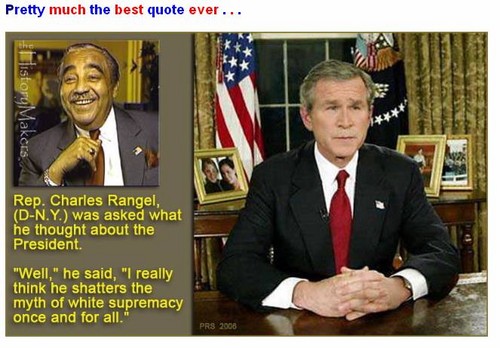 The shit storm ain’t over. It’s just warming up! And please, my American comrades, anything but that hyprocrite HILARY! (Jesus, what a basketcase of a country: over in the USA they reckon a filthy rich establishment figure like Al Gore is a pinko Lefty!)

Reaching for another chilled vodka spritzer, this was Max Gross for Xenox News: counting the beat, beating the odds and cursing all gods. Cheers, kids!

Word of the Day: Purview

FAMILY FIRST TO BAN ALL "RUDIES"!

CALL GOES OUT TO FREE SADDAM