The latest disasterous U.S. airstrike in Pakistan reaffirms how the Bush administration's blundering arrogance is plummeting in the direction of the evil it proclaims to fight. More innocents slain, more outrage provoked.

Bush has never apologized to the Iraqi people for the three years of carnage done in the name of weapons of mass destruction, weapons that were never found, so why bother with its "ally" Pakistan? U.S. Drone Planes Have a Nearly Perfect Record of Failure
by Ted Rall

In the dark, pre-dawn hours of Friday, the thirteenth of January, near the Afghan-Pakistani border, the buzz of an unmanned robot plane broke the silence. Half a world and 12 and a half time zones away, someone on the sixth floor of CIA headquarters keyed a command into a computer. The digitized message, relayed through the building's circuitry and transmitted skyward, bounced along an array of aircraft and satellites before arriving at the RQ-1 Predator drone plane hovering above the Bajaur region of Pakistan's Federally Administrated Tribal Areas (FATA). Four AGM-114N Hellfire II missiles, each purchased by American taxpayers from Lockheed Martin at a cost of $45,000, streaked off toward the hamlet of Damadola, five miles into Pakistan.

The four missiles, each carrying enough explosives to take out an armored vehicle, slammed into three local jewelers' houses at 950 miles per hour, nearly twice the speed of a passenger jet at cruising altitude. "The houses have been razed," reported a neighbor, a member of the Pakistani parliament. "There is nothing left. Pieces of the missiles are scattered all around. Everything has been blackened in a 100-yard radius." The target of this latest assassination attempt via missile strike, Al Qaeda second-in-command Ayman al-Zawahiri, wasn't there. At least 22 innocent civilians, including five women and five children, were killed. "They acted on wrong information," a Pakistani intelligence official said of the Americans.

The political fallout is devastating. The Pashtun tribesmen of FATA, still enraged at the militarization of an autonomous region that regular Pakistani army troops first invaded in 2004, are threatening a general uprising. As tens of thousands of people chanted "death to America" at protest marches across Pakistan, the regime of U.S. puppet dictator General Pervez Musharraf--weakened by the West's failure to provide earthquake aid in Kashmir--was pushed to the brink of collapse. After Musharraf: the first civil war in a nuclear power.

This was only the latest botched U.S. attack. Eight days earlier, another attempt to kill al-Zawahiri failed when a missile blew up a house in the Saidgi area, also in the FATA, based on another incorrect report. Eight innocent civilians died.

If insanity is repeating an action in expectation of different results, the assassination-by-joystick squad at Langley is clearly nuts. How many must die before they notice that precision airstrikes are anything but?

In the wake of 9/11 the Pentagon went gaga over unmanned aerial vehicles. "These systems...park over the bad guys, watch them continually, never give them a break," said Dyke Weatherington, UAV chief in Donald Rumsfeld's office, in 2002. "The other aspect is that we're doing that without putting service members at risk." But history belies Rumsfeld's assurance that the Predator-Hellfire program has a "darned good record."

On February 4, 2002 a Predator fired a Hellfire missile at three men, including one nicknamed "Tall Man" who was mistaken by CIA operators for the 6'5" Osama bin Laden, near Zhawar Kili in Afghanistan's Paktia province. "The people who have the responsibility for making those judgments made the judgments that, in fact, they were Al Qaeda," said Rumsfeld. They were not. The victims were desperately poor civilians gathering scrap metal from exploded missiles to sell for food. The U.S. has not apologized.

On May 6, 2002 a Predator fired a missile at a convoy of cars in Kunar province in an attempt to assassinate Afghan warlord Gulbuddin Hektmatyar because he opposes puppet ruler Hamid Karzai. Hekmatyar wasn't there. At least ten civilians were blown to bits. Hektmatyar, understandably perturbed, has since declared himself and his militia our mortal enemies. No apology there either.

And now the massacre in Pakistan.

Mishaps are unavoidable due to the Predator's design limitations. Image resolution is too fuzzy to make out much of anything at 10,000 feet up. Fly the drone lower than that and it becomes vulnerable to anti-aircraft fire. Assassinations by unmanned aircraft seem doomed to failure--out of thousands of sorties, the Defense Department can only point to a single success, the alleged Hellfire killing of Al Qaeda's supposed "number five guy" in Pakistan last year. But it's not just drone planes. Attempted assassination bombings attempted by flesh-and-blood pilots haven't fared better.

Ronald Reagan ordered an airstrike on Libyan leader Moammar Khadafi's home in Tripoli. Khadafi survived, but his baby daughter and 37 others were killed. In 1998 Bill Clinton ordered Tomahawk cruise missiles fired at Osama bin Laden's training camp in Afghanistan and a pharmaceutical plant in Sudan. Bin Laden wasn't there, but dozens of others died; the Sudanese facility turned out to be an innocuous aspirin factory. At the start of the 2003 invasion of Iraq George W. Bush ordered 40 cruise missiles fired at a Baghdad restaurant where Saddam Hussein was reported to be eating dinner. He wasn't. No Baathist officials died. Fourteen members of two Christian families, mostly women and children, did.

Incompetence and poor intelligence are not exclusive to us. Though brutal, the 9/11 attacks fell far short of their planners' immediate goals. Tens of thousands would have died at the World Trade Center had the hijackers known that New Yorkers start work at nine. And even if one of the two Washington-bound planes had struck the White House, Bush was in Florida at the time.

Targeted killing by aerial bombardment, whether it's carried out by pilots, hijackers or computer-guided drones, is an inherently flawed concept--too easy to contemplate, too hard to carry out, and too ham-fisted to execute without also killing civilians. Intelligence is faulty, guidance systems fail, imagery is fuzzy. When the target of an assassination is present, small bombs can't ensure success and big bombs invariably result in "collateral damage." Technology hasn't changed everything. You can't know what's going on on the ground from the air.

Civilized nations should band together to renounce and outlaw these sloppy and obscene aerial assassination attempts, which send the terrifying message that killing civilians is acceptable in the pursuit of justice. But if the international community can't go that far, they can at least ban the use of unmanned vehicles like the Predator. Murder by mistake is bad enough when a human being can be held accountable.

I admit that my visions can never mean to other men as much as they do to me. I do not regret this. All I ask is that my results should convince seekers after truth that there is beyond doubt something worth while seeking, attainable by methods more or less like mine. I do not want to father a flock, to be the fetish of fools and fanatics, or the founder of a faith whose followers are content to echo my opinions. I want each man to cut his own way through the jungle.

The Confessions of Aleister Crowley, Ch. 66 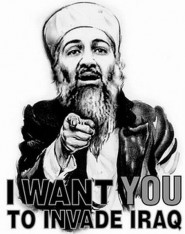 THERE IS NO PROOF I TELL YOU.

Waiting for the call