As lameduck U.S. president George W Bush abandons his failed Iraq "reconstruction program", leaving that shattered nation with the dead weight of tens of billions of dollars in unfinished projects - and an oil industry and electrical grid that have yet to return to pre-war production levels - the Iran/Iraq Shi-ite nexus continues to strengthen.

An Islamic Republic of Iraq ruled by Sharia Law seems as inevitable as the impeachment of Bush. The pending U.S. retreat is painstakingly obvious. Even now, increasing U.S. air power is the occupation forces' main weapon, while troops hunker down in the safety of their million dollar fortresses. Leave the Field Now - the Iraqi Endgame is About to Begin
by Simon Jenkins

The good news is that 2006 will see the effective end of the western occupation of Iraq. It will end because everyone will be exhausted: the Americans, the British, the Iraqis and their neighbours. It will end because all justification for its continuance will have evaporated.

The election whose result is to be declared this week is good news. The federal constitution fashioned by Zalmay Khalilzad, the American ambassador, is good news. The resulting coalition government will be good news since it will put the strongest group, the cleric-backed pro-Iranian Sciri, or Supreme Council for the Islamic Revolution in Iraq, in effective power.

But all this good news will depend on one thing: the new government being seen to stand on its own feet. It must have the legitimacy and authority to forge its own alliances and hack its own deals. As long as its land is pockmarked with fortresses stuffed with 180,000 foreign troops, such independence will be unreal. Such a government will continue to be treated as an American puppet.

On December 22 Tony Blair paid his Christmas call on British troops in Basra to tell them how much things were improving. This time he said security was “completely changed” from last year. What he meant was unclear. It was as if Gladstone had visited Gordon during the siege of Khartoum. Did it not seem strange to Blair that he could not move outside his walled fortress, could not drive anywhere or talk to any Iraqis? Did he wonder why British troops have withdrawn from two anarchic provinces? Was he really told that security is transformed for the better? If so he is horribly deceived.

Reliable reporting from Iraq is now so dangerous that the level of insecurity can be gleaned only from circumstantial evidence. Baghdad outside the American green zone is now all “red zone”, off limits to any but the most reckless foreigner. The death rate and the number of explosions are rising. While some rural areas are relatively safe there is no such thing as national security. Iraq’s borders are porous. Crime is uncontrolled. The concept of an “occupying power” is near meaningless.

The Americans cannot even protect the lawyers at Saddam’s trial, two of whom have been killed. Iraqis are meeting violent death in greater numbers probably than at any time since the Shi’ite massacres of 1991. Professionals are being driven into exile, children are kidnapped, women are forced indoors or shot for being improperly dressed. Those Britons who preen themselves for “bringing democracy to Iraq” would not dare visit the place. They have brought three elections, but elections without security do not equal democracy.

This is no time to rehearse the self-delusion, vainglory, ineptitude and cruelty of this venture. The only sensible debate is how to help Iraq back on its feet after this bungled attempt to “defeat terrorism” in the region. It will not be easy. It requires the victorious Shi’ite leaders to respect a devolution of power and money to the Kurdish and the Sunni minorities, as ordained by the federal settlement in Khalilzad’s constitution. Local Sunni and Shi’ite power brokers must fix the boundaries of their domains and the spoils that go with them. Such deals are crucial to a future Iraq. The alternatives are tyranny or separatism, probably both.

Such a settlement will have traction only if negotiated notunder American guns but by plenipotentiary ministers and provincial chiefs. Already such ministers depend for support and protection not on a national army or police force but on private militias and mercenaries. These include those of the interior minister, Bayan Jabr, allegedly responsible for reviving Saddam’s killing squads and torture chambers. Governors, mayors and police chiefs depend for their authority on cutting deals with gangs and militias. This, not the occupation, is the fact of power in Iraq.

In reality the occupation cut and ran from Iraq in the course of 2004. This was when the Americans and their allies abandoned the policing of towns and cities and retreated bruised to more than 100 fortified bases. This is not like the Vietnam war, when American soldiers could move round Saigon at will. The bases are like crusader castles dotting a hostile Levant. Movement between them must be by air or heavily armoured convoy. Ferocious search-and-destroy sallies by the US Marines do not project power, only death and resentment.

The recent Anbar operation reportedly turned local support for Al-Qaeda from a trickle to a flood. Money is sprayed at sub-contractors (much of it stolen), but America exerts no executive power outside the capital. It imposes no law and order and cannot even protect infrastructure. This is not an occupation. It is a military squat.

The question for Tony Blair and George Bush is almost irrelevant to Iraq. It is how can the squatters leave with enough dignity to pass muster back home and not seem like weakness abroad? How can it be staged to fit in with Bush’s mid-term elections and Blair’s legacy agenda? The policy stance in both Washington and London is of withdrawal “as soon as the security situation permits”. Hence presumably Blair’s insistence that security is getting better. Since it is not getting better he must be saying it as cover for withdrawal.

The exit strategy at present relies on there being a fixed moment when the Iraqi army will pass some notional Sandhurst test. It will be “ready to take on the insurgents” and thus “prevent civil war”. Such talk has long brought comfort to the armchairs of Pall Mall. Thus was the Indian army to keep the Empire intact. Thus were Diem’s soldiers to take on the Vietcong and Moscow’s surrogates to defeat the Taliban. The concept of locals being “almost ready” to replace our boys has long appealed to the imperial imagination.

Having recently visited the Iraq army I can attest to the courage of its officers and the commitment of its instructors. But I was constantly being taken aside and told that it was inconceivable that these soldiers would obey an order from a partisan minister in Baghdad to advance against distant militias except under American protection. That was even assuming that the constitution allowed them to do so, which it probably does not. Only the Kurdish peshmergas would happily fight Sunnis or Shi’ites, and that would not be a good idea. As for the police, the basis of law and order, they are a long-lost cause.

Treating the Iraqi army as the cement that will glue together a new Iraq is unreal. Some Baghdad units might form a new Republican Guard were a strongman to emerge from the forthcoming coalition haggle. But if the most devastating American firepower cannot find, let alone suppress, Al-Qaeda’s Musab al-Zarqawi, what hope is there for an Iraqi army? Zarqawi will be suppressed if and only if the Sunni militias take it upon themselves to do so. That must await the end of the occupation. The same goes for the pro-Iranian hotheads in the south.

The operative word is await. All Iraq is waiting. Civil strife is appalling because the militias, gangs and police operate under no political authority and with an army supposedly being prepared to fight them. The idea that American or British withdrawal would “lead to civil war” suggests that Iraq is like Yugoslavia. It is not. Since the foreign troops spend most of their time in bases they have no role in policing Iraq’s communal strife. Their departure would rather end what Iraqis regard as a humiliation and remove a recruiting sergeant and target for the insurgency.

The next stage in Iraq is no longer within the capacity of America or Britain to determine. All they can do is postpone it. The country is about to acquire its third government in as many years. Left to its own devices this government might just find enough authority to hold its country together. Imprisoned in its green zone castle as a puppet of the Pentagon, it will certainly not. That is why withdrawal needs a date, and an early one.

I was told by a senior security official last month that the Iraq experience had been so ghastly that at least no British government would do anything like it “for a very long time indeed”. Funny, I thought. Why are 4,000 British troops leaving to fight the Taliban in southern Afghanistan, whence even the Americans have fled? Nobody can give me an answer.

Simon Jenkins writes for the London Sunday Times and was previously editor of The Times. After ten years as its twice-weekly columnist he is shortly to join the new Guardian in the same capacity, combining it with his Sunday Times column. He has written and broadcast extensively about politics and his second love, architecture. He wrote histories of the Portuguese revolution, the British press, the Falklands war and is currently writing a political biography of Margaret Thatcher and Thatcherism. His two recent compendiums, England's Thousand Best Churches and England's Thousand Best Houses are published in America by Viking.


This site contains copyrighted material the use of which has not always been specifically authorized by the copyright owner. We are making such material available in our efforts to advance understanding of environmental, political, human rights, economic, democracy, scientific, and social justice issues, etc. We believe this constitutes a 'fair use' of any such copyrighted material as provided for in section 107 of the US Copyright Law. In accordance with Title 17 U.S.C. Section 107, the material on this site is distributed without profit to those who have expressed a prior interest in receiving the included information for research and educational purposes. For more information go to: http://www.law.cornell.edu/uscode/17/107.shtml. If you wish to use copyrighted material from this site for purposes of your own that go beyond 'fair use', you must obtain permission from the copyright owner.

Blessed are the forgetful: for they get the better even of their blunders. 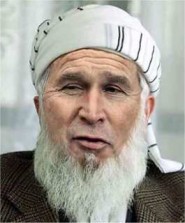 U.S. OCCUPATION OF IRAQ: QUOTE OF THE WEEK

Is there a Solution for the mess in Ukraine?