This clear clarion call from "anti-war mom" Cindy Sheehan speaks for itself:

Perhaps, even in the dead zone of U.S. public awareness, Cindy Sheehan will be the catalyst for the impeachment of George W. Bush. Hypocrites and Liars
by Cindy Sheehan

The media are wrong. The people who have come out to Camp Casey to help coordinate the press and events with me are not putting words in my mouth, they are taking words out of my mouth. I have been known for sometime as a person who speaks the truth and speaks it strongly. I have always called a liar a liar and a hypocrite a hypocrite. Now I am urged to use softer language to appeal to a wider audience. Why do my friends at Camp Casey think they are there? Why did such a big movement occur from such a small action on August 6, 2005?

I haven't had much time to analyze the Camp Casey phenomena. I just read that I gave 250 interviews in less than a weeks time. I believe it. I would go to bed with a raw throat every night. I got pretty tired of answering some questions, like: 'What do you want to say to the President?' and 'Do you really think he will meet with you?' However, since my mom has been sick I have had a chance to step back and ponder the flood gates that I opened in Crawford, TX.

I just read an article posted today on LewRockwell.com by artist Robert Shetterly who painted my portrait. The article reminded me of something I said at the Veteran's for Peace Convention the night before I set out to Bush's ranch in my probable futile quest for the truth. This is what I said:

"I got an e-mail the other day and it said, 'Cindy if you didn't use so much profanity '. There's people on the fence that get offended.'

And you know what I said? 'You know what? You know what, god damn it? How in the world is anybody still sitting on that fence?'

This is what the Camp Casey miracle is all about. American citizens who oppose the war but never had a conduit for their disgust and dismay are dropping everything and traveling to Crawford to stand in solidarity with us who have made a commitment to sit outside of George's ranch for the duration of the miserable Texan August. If they can't come to Texas, they are attending vigils, writing letters to their elected officials and to their local newspapers; they are setting up Camp Casey branches in their hometowns; they are sending flowers, cards, letters, gifts, and donations here to us at Camp Casey. We are so grateful for all of the support, but I think pro-peace Americans are grateful for something to do, finally.

One thing I haven't noticed or become aware of though is an increased number of pro-war, pro-Bush people on the other side of the fence enlisting to go and fight George Bush's war for imperialism and insatiable greed. The pro-peace side has gotten off their apathetic butts to be warriors for peace and justice. Where are the pro-war people? Everyday at Camp Casey we have a couple of anti-peace people on the other side of the road holding up signs that remind me that 'Freedom isn't Free' but I don't see them putting their money where their mouths are. I don't think they are willing to pay even a small down payment for freedom by sacrificing their own blood or the flesh of their children. I still challenge them to go to Iraq and let another soldier come home. Perhaps a soldier that is on his/her third tour of duty, or one that has been stop-lossed after serving his/her country nobly and selflessly, only to be held hostage in Iraq by power mad hypocrites who have a long history of avoiding putting their own skin in the game.

Contrary to what the mainstream media thinks, I did not just fall off a pumpkin truck in Crawford, TX. on that scorchingly hot day two weeks ago. I have been writing, speaking, testifying in front of Congressional committees, lobbying Congress, and doing interviews for over a year now. I have been pretty well known in the progressive, peace community and I had many, many supporters before I left even left California. The people who supported me did so because they know that I uncompromisingly tell the truth about this war. I have stood up and said: 'My son died for NOTHING, and George Bush and his evil cabal and their reckless policies killed him. My son was sent to fight in a war that had no basis in reality and was killed for it.' I have never said 'pretty please' or 'thank you.' I have never said anything wishy-washy like he uses 'Patriotic Rhetoric.' I say my son died for LIES. George Bush LIED to us and he knew he was LYING. The Downing Street Memos dated 23 July, 2002 prove that he knew that Saddam didn't have WMD's or any ties to Al Qaeda. I believe that George lied and he knew he was lying. He didn't use patriotic rhetoric. He lied and made us afraid of ghosts that weren't there. Now he is using patriotic rhetoric to keep the U.S. military presence in Iraq: Patriotic rhetoric that is based on greed and nothing else.

Now I am being vilified and dragged through the mud by the righties and so-called 'fair and balanced' mainstream media who are afraid of the truth and can't face someone who tells it by telling any truth of their own. Now they have to twist, distort, lie, and scrutinize anything I have ever said when they never scrutinize anything that George Bush said or is saying. Instead of asking George or Scotty McClellan if he will meet with me, why aren't they asking the questions they should have been asking all along: 'Why are our young people fighting, dying, and killing in Iraq? What is this noble cause you are sending our young people to Iraq for? What do you hope to accomplish there? Why did you tell us there were WMD's and ties to Al Qaeda when you knew there weren't? Why did you lie to us? Why did you lie to the American people? Why did you lie to the world? Why are our nation's children still in harm's way and dying everyday when we all know you lied? Why do you continually say we have to 'complete the mission' when you know damn well you have no idea what that mission is and you can change it at will like you change your cowboy shirts?'

Camp Casey has grown and prospered and survived all attacks and challenges because America is sick and tired of liars and hypocrites and we want the answers to the tough questions that I was the first to dare ask. THIS is George Bush's accountability moment and he is failing miserably. George Bush and his advisers seriously 'misunderestimated' me when they thought they could intimidate me into leaving before I had the answers, or before the end of August. I can take anything they throw at me, or Camp Casey. If it shortens the war by a minute or saves one life, it is worth it. I think they seriously 'misunderestimated' all mothers. I wonder if any of them had authentic mother-child relationships and if they are surprised that there are so many mothers in this country who are bear-like when it comes to wanting the truth and who want to make meaning of their child's needless and seemingly meaningless deaths?

The Camp Casey movement will not die until we have a genuine accounting of the truth and until our troops are brought home. Get used to it George, we are not going away.

Published on Saturday, August 20, 2005 by CommonDreams.org 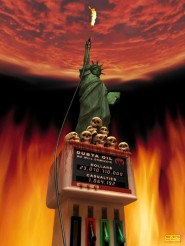 WHAT I HAVE LEARNED FROM THE US WAR ON IRAQ

We won! Fuck the maggots!

Dear Ricky...When Should I Take The Law Into My Own Hands?