SYRIA IS THE NEW CAMBODIA?

After battling to quell insurgents along the Iraqi-Syrian border, unnamed US officials are starting to speculate on just how much help Syria is providing to these terrorists. Said one to a XenoxNews reporter at Green Zone shindig:
"Shit, I think Syria is our new Cambodia."

Of course he was referring to how the Viet Cong used to hide along the South Vietnam/ Cambodia border so they could take refuge in Cambodia to avoid destruction by US forces. It seems that now the insurgents in Iraq are at the very least utilising the same border crossing technique to keep themselves away from harm by Coalition forces. The question arising from all this is how much does Damascus know and allow, and how much if any support are they giving to the anti-democracy terrorists?

President Nixon’s response to the Viet Cong Cambodia crossings was to bomb their bases in Cambodia. Is there similar thinking going on in Washington now?

You know, a long time ago being crazy meant something. Nowadays everybody's crazy. 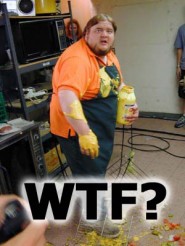