"United States officials were surprised and heartened today at the size of turnout in South Vietnam's presidential election despite a Vietcong terrorist campaign to disrupt the voting. According to reports from Saigon, 83 percent of the 5.85 million registered voters cast their ballots yesterday. Many of them risked reprisals threatened by the Vietcong. A successful election has long been seen as the keystone in President Johnson's policy of encouraging the growth of constitutional processes in South Vietnam."
- Peter Grose, in a page 2 New York Times article titled, 'U.S. Encouraged by Vietnam Vote,' September 4, 1967.
Occupation Thwarts Democracy
by John Nichols

Under pressure from the Bush Administration, political parties campaigning in this weekend's so-called "election" in Iraq did not propose timetables for the withdrawal of US troops from their homeland.

This constraint upon the debate effectively denied the Iraqi people an honest choice. Polls suggest that the majority of Iraqis favor the quick withdrawal of US forces, yet the voters of that battered land were cheated out of a campaign that could have allowed them to send a clear signal of opposition to the occupation.

Despite this disconnect, when the voting was done, Administration aides declared a victory in President's Bush's crusade for "liberty." And thus was born the latest lie of an Administration that has built its arguments for the invasion and occupation of Iraq on a foundation of petty deception and gross deceit.

That democracy has been denied in Iraq is beyond question. The charade of an election, played out against a backdrop of violence so unchecked that a substantial portion of the electorate-- particularly Sunni Muslims--avoided the polls for reasons of personal safety, featuring candidates who dared not speak their names and characterized by a debate so stilted that the electorate did not know who or what it is electing.

Now that this farce of an "election" in Iraq is done, the fight for democracy should move from Baghdad to Washington. It is in the US Capitol that members of Congress, if they are serious about spreading democracy abroad and strengthening it at home, need to begin advocating for the rapid withdrawal of US troops from Iraq. Americans need to recognize that, in addition to the lives and dollars this occupation has cost the United States, it has also assaulted democratic ideals handed down by the founders of America's experiment with democracy. George Washington, Thomas Jefferson and their kind did not warn casually against the "entangling alliances" that go with empire building. Having revolted themselves against an occupying force, they well recognized the necessity that democracy be homegrown.

"We should have nothing to do with conquest," warned Jefferson, who believed the US must lead by example, not by force. The invasion and occupation of other lands would, the founders feared, turn America into precisely the sort of empire against which they had so recently rebelled.

When he served as Secretary of State, John Quincy Adams explained the principle best: "(America) knows best that by enlisting under other banners than her own, were they even the banners of foreign independence, she would involve herself beyond the power of extrication, in all the wars of interest and intrigue, of individual avarice, envy, and ambition, which assume the colors and usurp the standard of freedom."

None of the twisted "spin" about spreading democracy that will be mouthed in coming days by members of the Bush Administration, its allies in Congress and its amen corner in the media will be sufficient to counter the truth handed down by those who founded the American democracy.

John Nichols's new book, Against the Beast: A Documentary History of American Opposition to Empire (Nation Books) will be published January 30. Howard Zinn says, "At exactly the when we need it most, John Nichols gives us a special gift--a collection of writings, speeches, poems and songs from thoughout American history--that reminds us that our revulsion to war and empire has a long and noble tradition in this country. Frances Moore Lappe calls Against the Beast, "Brilliant! A perfect book for an empire in denial."

Published on Sunday, January 30, 2005 by the Toronto Star
Today's Charade is Simply About Iraq's Oil
by Linda McQuaig

In the weeks before the U.S. invasion of Iraq, the influential New York Times columnist Thomas Friedman wrote approvingly of "the breath-taking audacity" of the Bush administration's plans for Iraq.

Friedman noted that the invasion would lead to "a long-term U.S. occupation" and that "Iraq will be controlled by the iron fist of the U.S. Army." Apparently he didn't regard any of this as a problem — just part of the job of remaking Iraq to fit the fantasies of U.S. policymakers.

Friedman's casual acceptance of Washington's right to redesign other countries — an attitude rampant among media commentators as well as U.S. officials — sheds light on why the occupation of Iraq has been such a disaster, and why there's little reason to believe Iraq is on the path to democracy.

No matter how inspired the rhetoric, the U.S. project in Iraq has never been about democracy. It's been about getting control of Iraq's vast, virtually untouched oil reserves, and extending Washington's military reach over the region. "Think of Iraq as a military base with a very large oil reserve underneath; you can't ask for better than that," Wall Street oil analyst Fadel Gheit told me in an interview.

Bush officials never wanted to run Iraq themselves, but rather to have a loyal local do it for them. Before the invasion, their plan was simply to install the wealthy, CIA-groomed exile Ahmed Chalabi. They also drew up sweeping plans to privatize the entire Iraqi economy, including the oil sector — before the Iraqi people got to cast a single vote.

But the "iron fist of the U.S. army" has not been popular in Iraq, fuelling a resistance that has turned key parts of the country into a free-fire zone.

Among other things, this makes meaningful elections impossible. If large numbers of people are too terrified to vote, the results won't reflect the popular will — yet they'll give an aura of legitimacy to a government that may represent a tiny minority.

But while useless in advancing real democracy, the election is highly useful to George W. Bush, who will point to a "democratic" transfer of power.

Questioned last week, Bush said the U.S. would withdraw if asked by the new government. Really?

Earlier in the week, the Pentagon acknowledged plans and budgets to keep 120,000 troops there for at least two more years.

It sure looks like Washington plans to go on calling the shots in Iraq, but now there will be a plausible government to show off to the world. If Iraq's oil industry is put on the chopping block and ends up in the hands of U.S. oil companies, Washington will be off the hook; the decision will have been made by the "elected" Iraqi government. 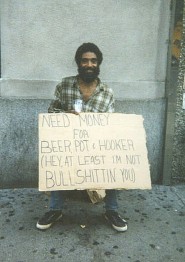 THE RODENT’S NATIONAL EDUCATION STRATEGY: NO FLAG, NO FUNDING!

REMEMBER, WE ARE THE GOOD GUYS...

An important message from the Prime Minister to pensioners about their status.