The history re-writing machine has kicked into high gear, with its typically breathtaking power and efficiency. Why did we go to war with Iraq in 2003? Because the CIA gave us faulty intelligence. Everyone knows that. Congress would not have authorized the Iraq war "if we knew what we know now."

That's what Senator Jay Rockefeller is telling everyone who will listen. Rockefeller is the ranking Democrat on the Senate Intelligence Committee, whose report has put the stamp of approval on this now-official version of history. It's the same history the New York Times endorsed several weeks ago, when it apologized for believing the now-discredited stories of Iraqi weapons of mass destruction. If the expert journalists at the Times could be so easily fooled, who could blame Congress for being fooled, too. It's all the fault of that darned CIA.

Of course there are those persistent reports that the Republican-led Senate committee is suppressing the full truth until after election day. Those reports say that the Committee knows why the CIA produced faulty intelligence. It was no accident. The top CIA officials were twisting the fact to tell the boss -- George W. and his top advisors -- what the boss wanted to hear. That's what smart bureaucrats always do.

So the official history will declare that someone in the executive branch, either In the CIA or in the White House, misled Congress, the media, and all of us into endorsing the war. All of us meant well. But none of us knew the truth. There was just a flaw in the intelligence system. Once we fix that flaw and make sure we all get accurate information, all will be well.

So we should still rely on a single official source for truth. We still need a ministry of truth. We just have to make it work better. At least that's what the Senate Intelligence Committee seems to want us to think.

Intelligence? The committee's name gives it more credit than it deserves. To hear the committee members and the media tell it, you'd think that the executive branch of the federal government is the only source of information in the world.

In the months before the invasion of Iraq, there were plenty of very reputable sources discrediting the administration's claims about WMD, explaining clearly and patiently why they were probably false. Everyone could have known the truth. What kind of intelligence is it to ignore all those sources, sit around and wait for the ministry of truth to tell you the "facts," then believe everything the ministry of truth says? If my students rely on only one source in their research, they flunk. Perhaps the committee should be re-named the Senate Stupidity Committee.

Or perhaps those senators are smarter than we think. Since their report is being accepted virtually without question in the mainstream press, all the responsibility for the war is being put on the administration. Of course, that's where much of the blame belongs. But if no one points a finger at Congress as an accomplice, the senators (and the representatives) get off scot free, without bearing their share of the blame.

What does a senator or representative get out of it? What every senator and representative wants most: a better shot at getting re-elected. Of course, there is the campaign money that comes in from the military-industrial complex. But even more important, I suspect, is insurance against the dreaded accusation of being "soft on defense."

There are very few districts in the country, and no entire states, where a candidate will suffer from having supported a war (unless the war turns as unpopular as Vietnam, and we are a long way from that now). On the other hand, in every state and in most districts, a candidate can be fatally wounded by the appearance of not "supporting our men and women in uniform."
If you are in Congress, then, it makes perfect sense to let the executive branch call the shots. If you vote for a war and the war stays popular, you improve your chances at the next election. If the war turns bad, you can put all the blame on the president, his advisors, and the CIA. Let them decide among themselves who will take the fall. At least it won't be Congress.

When Congress blindly followed the executive branch down the path to war in Iraq, rather than checking out the facts for itself, it taught us and our children a frightening lesson. In the war on terrorism, as in the cold war, thinking for yourself is still the greatest sin. It's much wiser -- and politically safer -- to accept the official version of history from the ministry of truth.

Before we point the finger of blame at Congress, though, consider why unthinking support for war works so well at re-election time. If legislators don't pay much attention to alternative sources of information, it's largely because they do pay lots of attention to the average voter's mindset. In the climate of fear that has gripped this country since the 1940s, facts scarcely matter to much of the public.
There is one supposed "truth" that overrules all others: the United States is under deadly threat, and all true-blue Americans must band together to defend the homeland against that threat. We must all rally around the flag and around the leaders who are carrying that flag for us.

In times of national crisis, the prevailing wisdom insists, we can afford no internal dissension. Since the '40s, we have been in a permanent state of crisis, and there is no end in sight. So it scarcely matters whether the president, the CIA, or anyone else tells us the truth about Iraq or Al-Qaeda or WMD. Those are just secondary details.

The only question that really matters is whether you are taking the strongest possible stand against the enemy (whoever the current enemy happens to be) and following the dictates of the ministry of truth. That is certainly a question most voters ask when Congressional elections roll around. Any candidate who looks "soft on defense" faces an uphill struggle at best.

As long as our national life is founded on fear and the quest for "national security," there will be no real security. There will be only a quest for a more perfect security system, a quest that is doomed to fail, leaving us striving endlessly for security. As long our official history reinforces that quixotic quest, too many of us will depend on the government's ministry of truth, rather than checking out the facts for ourselves.

The problem is not getting the facts. We have policy critics and alternative media effective enough to insure that accurate facts will always be readily available. The problem is breaking through the reign of fear.

This email address is being protected from spambots. You need JavaScript enabled to view it.

That's what hell is; forgetting what you are. 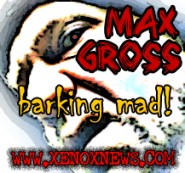 HOWARD Had Lunch With

PM Howard bounces back in Polls!

George Bush and the Devil

The True History of the Future