While the worlds most evil man sits laughing in Baghdad millions paraded their ignorance for all to see.

What is wrong with the world at the moment? Is it really only 18 months ago that the bastion of democracy the United States was attacked by fanatics who hate our freedom, our way of life? Now look around us. The elitist sections of our society are now trying to turn the war on terror around and BLAME THE VICTIM! A man who tortures his own people. Who has practised genocide against his own people. Has killed untold thousands, nay, millions of innocent people. He is now a saint. Worthy of being protected from the evil US.
What a load of lefty rubbish!
You lefty nutwits just ask yourselves. What are you doing to help the people of Iraq?
Are you going to leave them under the heel of a brutal dictator?
What are you doing to stop the threat of terrorism?
Why aren't you standing up against Muslim extremists?

Concerned Citizen
Some Fucking Where 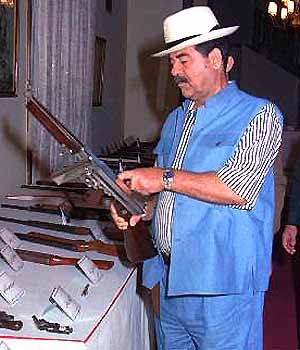 In the eucharist of the simulated auto-disaster we see the transliterated pudenda of Ralph Nader, our nearest image of the blood and body of Christ.

PROTESTING FOR A NIRVANA - A NEW AGE FOR TIBET

Schapelle Corby Gets a Global Demo and a Landmark Video

SCARED OF ROBOTS? MONKEYS ARE TOO!

Things I wanna hide on the internet