THE SINISTER HAND OF TEHRAN BEHIND THE GAZA PEACE FLOTILLA?

Now that the dust has settled after the attempted forced entry of the so-called Gaza ‘Peace’ flotilla into Israeli territory, the sinister intention of the ‘peace activists’ has become clear. Brazenly singing songs of Jewish massacres the day before the interception, these metal bar wielding ‘peaceniks’ have been stopped in their attempt to open a pipeline of illegal supplies to the terrorist government of Gaza.

But the question remains, who was really behind this attack on the Middle East’s only democracy?

Well it seems that long hand of Tehran maybe involved. It is obvious that a large sum of money would have been needed to assemble such a large collection of vessels; and it is also quite obvious that the flotilla's usual rent-a-crowd collection of communists, deluded pacifists, and leftist agitators would never be able to come up with the necessaries for such a voyage. It was only after some wealthy donors finally came to the party that the provocative flotilla was finally allowed to leave for its smuggling expedition to Gaza.

Who were these donors? Where did their money come from? Well like most trouble in the Middle East you can expect the murky hand of the Mullahs of Tehran to be behind it. And to think that these evil doers will have access to nuclear weapons very soon unless the international community stands up to their blackmail! It would have been quite easy for them to funnel funds to the perpetrators of the flotilla of Hamas supporting terrorist sympathisers. And with the Islamist regime of Turkey cosying up to the crazed Iranian leader Madmanahmed it seems the Turkish government wouldn’t stop it either.

This sort of brazen attempt to bully Israel would not have happened under the watch of strong and principled world leaders like President Bush or PM John Howard. They would have seen that when it comes to terrorism there is no ifs or buts; you do not fund it and you do not support it. Unfortunately their replacements Obama and Rudd seem like boys in a man job; unable to show any will, and too readily deferring to the special interests of loud mouthed leftist lobby groups. If these current leaders don’t act like men soon we could all facing the same threats as Israel: under the blackmail of nuclear armed Mullahs in Tehran!

Wino, always stumbling, Yet in drinking I show most discretion. Where to wind up, Sober, this evening? Somewhere on the river bank I’ll find dawn’s moon. 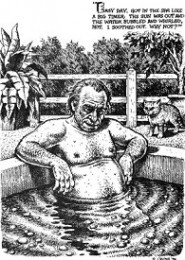 Derek and Clive Get The Horn