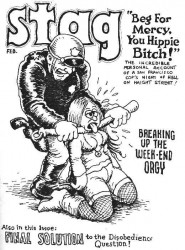 Saddam Hussein loves watching The Godfather, listening to Frank Sinatra sing "Strangers in the Night" and watching videos of his enemies being tortured, sometimes donning a cowboy hat, sipping whiskey on the rocks and puffing on a cigar as he watched the torture.

Crime fascinates all of us. We like to look at it and touch it, while staying safe. Great crime fiction pulls that rug out from under you and gets your hands burned.

An Irishman goes to the Doctor with botty problems....