MORE COLATERAL DAMAGE - SORRY ABOUT THAT!

Once again, American military officials are making pathetic excuses for yet another bloody blunder during the nine-month war in Afghanistan after a US plane targeted a house full of wedding guests, killing at least 30 of them, more innocent victims as the USA continues its campaign of revenge for the mere geographical fact that Osama bin Laden – blamed by the US for the September 11 attacks – once lived in Afghanistan.
The Americans seem to think if they keep shooting at anything that moves they’ll eventually strike a legitimate target!

Survivors of the attack said several guests had just fired their Kalashnikovs into the air, as is traditional in Pashtun wedding ceremonies. A US air patrol identified gunfire and responded with murderous force.

An AC-130 helicopter gun-ship and B-52 bomber blasted the scene, leaving scores of people dead - among them women and children - and at least 40 injured. The US attack lasted for two hours.

"There was no one to help last night," one resident, Abdul Saboor, said. "We managed to transfer some of the wounded to Kandahar in the morning. Some of the foreigners' choppers also came to help. There are no Taliban or al-Qaida or Arabs here. These people were all civilians, women and children."

An Afghan defence ministry official last night said more than 30 people had been killed in the attack. The original death toll had been put as high as 120.

Several survivors recovering in Kandahar's Mir Wais hospital yesterday said US troops had arrived at the scene shortly afterwards demanding to know "who fired on the helicopters".

Hospital officials said a number of wounded were being brought to Kandahar, a day's journey away by road. Most of the dead and injured were women and children, they said. A six-year-old girl named Paliko was brought to the hospital still wearing her party dress. She was injured, but villagers said all members of her family were killed.

The incident is deeply embarrassing for the American military, which – despite its acclaimed military if not moral superiority - has so far had little success in fulfilling its initial war aim of hunting down Osama bin Laden. Most senior Taliban figures together with remnants of al-Qaida are thought to have retreated into Pakistan's tribal regions late last year.

In Washington, the Pentagon yesterday admitted that at least one bomb dropped by western warplanes had missed its target, but it could not confirm claims that members of a wedding party had been killed.

American warplanes have made several other grievous errors during their war in Afghanistan - but are not believed to have killed so many civilians at a single stroke.

According to local Afghans, 11 members of a wedding party were killed in a similar incident in May in the village of Balkhiel, 30 miles north of the town of Khost. The guests were bombed after celebrating by firing into the air. US officials later insisted their planes had come under enemy attack.

The village of Hazar Qadam wrongly bombed in January is also in Oruzgan. Some 16 innocent people were killed and 27 captured. The 27 were later released after US officials admitted their mistake and allowed them to return home.

In April four Canadian soldiers died when a US fighter bombed them by mistake during a training exercise.

And last December planes bombed a convoy from the eastern town of Khost, killing a group of tribal elders travelling to Kabul for Hamid Karzai's inauguration as interim leader.

If only Americans were flying those hijacked planes over New York. They may have hit something but at least we know they would have missed the Twin Towers!

Every man has his own destiny: the only imperative is to follow it, to accept it, no matter where it leads him. 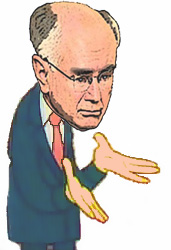