Applying hi-tech to an age-old problem.


It must be clear by now that an awful blight
is destrying our once was a nation.

Oz dullard's have encouraged a horrible little
ruinator to engage in non-stop destruction -
a war of terror no less!

Not only has the dullard's arse-seeking hero
been busy removing the last taint of welfare
from the Howardland, he probably caused the
widespread drought as well.
All that is left for him to do, is to remove the
old-age pension (that's coming), and get North
Korea to nuke this shithole on the cheap.

We have submitted to this reign of terror too long,
and we must strike at its root - bloody dullards!
No use in trying to fix the symptoms, we must
destroy the actual cause.

Dullards breed. Dullards make dullard children,
who make moronic children of their own, who make
more, who elect more their own kind, who hunt
down and destroy normals etc...

I say we put a stop to all this.
From now on, every time you see a dullard walking
down the street, kick him in the groin as hard as
you can, and as many times as you can, until you're
certain you have killed all of his sperm. 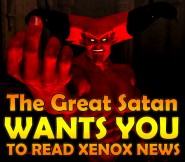 Are Aussies still too weak to fight for their country?