Home  Science/Tech  Studies and Research  IF THERE IS NO FREE WILL HOW CAN I BE MORALLY CULPABLE?

IF THERE IS NO FREE WILL HOW CAN I BE MORALLY CULPABLE? 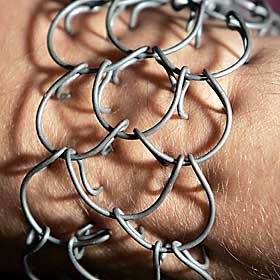 AS if the reward of the big sleep is not enough… now we are being told that in this life we have no free will and in fact it is all pre-programmed!

You can read it here:

The Lucretian swerve: The biological basis of human behavior and the criminal justice system

Abstract: It is widely believed, at least in scientific circles, that living systems, including mankind, obey the natural physical laws. However, it is also commonly accepted that man has the capacity to make “free” conscious decisions that do not simply reflect the chemical makeup of the individual at the time of decision—this chemical makeup reflecting both the genetic and environmental history and a degree of stochasticism. Whereas philosophers have discussed for centuries the apparent lack of a causal component for free will, many biologists still seem to be remarkably at ease with this notion of free will; and furthermore, our judicial system is based on such a belief. It is the author’s contention that a belief in free will is nothing other than a continuing belief in vitalism—something biologists proudly believe they discarded well over 100 years ago.

(this is a freely available article from PNAS)

Christ, can anyone get published in a scientific journal nowadays? I remember when ‘peer-reviewed’ actually meant there was some scrutiny of the manuscript, some debate about the ideas, some intellectual jousting about the contents; and all this before the fucking article gets published. Not any more. As we have seen with the farce of global warming, any fuckwit can have a go. Today to be on the pages of a 'Scientific Journal' takes little more than a PC and a call to the editor! Anyone can do it!

So; here is some more nonsense they would have us believe. You know it takes more than quoting dead greek pricks to make a hypothesis! What about the hours of research? The days spent 'crunching the numbers'? Forgot all that! Just quote Sappho and Lucretia Borgia and voila: you have a PubMed article.

This is why here at the Xenox Institute we long gave up any ideas of publishing our ground breaking research in the 'respected' journals. No. When we discover something you, the Xenox News reader, will hear it first! Always! Without a doubt!


This nonsense that has been published; it is only something a serious un-thinker could believe. Lazy intellectualism cobbled with puerile sloganeering. All in all just another sign of the denigration of Science.

All diplomacy is a continuation of war by other means.