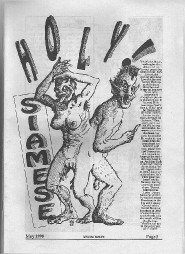 Xenox News has got a hold of some leaked photos of the Huygens probe that dove into the atmosphere of Titan, Saturn's biggest moon, in 2007. And they reveal a truly disturbing discovery which the authorities have hitherto tried to keep hid; the sand worms of Titan!

The next photo reveals it in more detail.

Finally another one is spotted.

Some scientists speculate that it could be the warmth of these monstrous creatures that create the crater like gap in the ice that usually covers the rest of Titan. Others suggest that in fact the worms eat the ice and survive on it's tiny microscopic bacteria. Whatever maybe the case these horrid creatures appear to be the first truly 'alien' life form man has encountered. God knows what other devilry is out there!

It's called the American Dream because you have to be asleep to believe it.

SMOOTH BETWEEN THE LEGS