Home  Science/Tech  Studies and Research  DON'T HAVE A COW, MAN!

WHAT'S IN A NAME?

For months now, the FBI has struggled to identify the anthrax used in last year's clumsy attacks via posted envelopes in the USA.

They thought it was the "Ames strain", highly virulent, resistant to vaccines and the choice killer bug of the US Army and terrorists (Hmm, is there a difference between those two?).

It now seems the Ames strain did NOT come from the Iowa town of Ames.

Federal officials now say it was a Texas strain, cultured from a Texas COW! Now some folks may claim that Texas is a long way from Montana (see article below: "McDonalds...") but I smell a rat! Or rather a cow.

The Ames strain -- one of 89 known genetic varieties of anthrax -- was used in each of the attacks on U.S. Senate offices and Florida and New York media companies in September and October.

That suggested access to one of a small group of U.S. military research labs known to stock Ames.

The Army seized upon the strain in 1981 as part of a national search for novel types of anthrax to use in testing vaccines on its own personnel, as sheep were considered too smart to sit still for it. It was named in 1985 by researchers at the U.S. Army Medical Research Institute of Infectious Diseases.

It was called "Ames" because the delivered package bore the return address of the USDA's National Veterinary Services Laboratories, an Ames lab that analyses diseased cows.

However, in the wake of last year's anthrax mail-out, USDA officials in Iowa found no record of anthrax strains delivered to the Army, and no reports of anthrax outbreaks among Iowa cattle in the early 1980s.

A search of archived (read concealed) Army documents revealed that the bug originated in Texas, which did experience anthrax outbreaks at the time.

The Texas Veterinary Medical Diagnostics Laboratory at Texas A&M University isolated the bug and mailed it to USAMRIID in May 1981.

Either way, the anthrax used in last year's so-called terrorist attacks is definitely of American origin, probably sent out by some clean-cut, god-fearing patriotic Yank.

Advice to George (Oilman) Bush and his salivating dogs-of-war: before you complain about somebody's bad breath, better go gargle mouthwash yourself!

...this gentleman made it his business to amaze people with his originality and wit, but ... it did not as a rule, come off.

Dostoevsky - on Ferdishenko in "The Idiot" 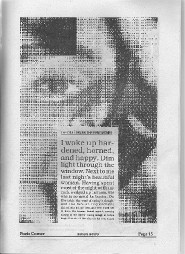 CALLING IN THE DEBT. ADVENT OF AHRIMAN JUST ABOUT NOW.

Why you need your sport

TO THE VICTOR THE OILS