AUSSIE PM ABBOTT HAS A WARGASM

"In our time, political speech and writing are largely the defence of the indefensible" - George Orwell, Politics and the English Language, 1946

"The life of the Iraqi citizen is going to dramatically improve" - George W. Bush, 2003

"Neither Jewish morality nor Jewish tradition can negate the use of terror as a means of battle" - Stern Gang, 1943

Here in Australia, when an "economic crisis" and "budget emergency" won't fool the punters and pundits and  there's always that good old reliable standby: wargasm. 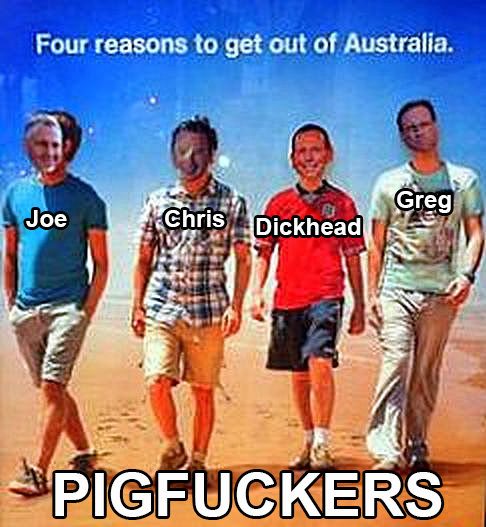 And with links revealed between malpractice in the New South Wales state Fiberals and the prime minister's own office, a new "Iraq crisis" sure comes in handy, a dead certainty (Sick pun intended) for distracting the hearts and minds of Aussies from the bumbling, bogus and bigoted Abbott government.

Ah, terrorism! Nothing really new on the face of the Earth but, nowadays, where would feeble, failing governments clinging to office be without it?

After all, all the world is in the grip of madmen, murderers, sycophants and liars, right?

So Team Abbott, milking the 13th anniversary of 9/11 and banking on the success of such tactics during the Howard Error has raised the nation's "Terrorist Alert Level" from "medium to high", whatever the fuck that actually means in English.

Since the US invasion of Iraq and Bali bombings of 2003, Australia's TAL has stuck at Medium. So what's changed?

According to our one-year-old prime minister it means that a terrorist attack is now "likely". By whom, where, when and how are details left floating in the foetid air.

An increased threat of a terrorist attack in my kitchen? Fair dinkum? Just as investigations uncover links between prohibited political donors and the office of the prime minister?

One thing's certain, when Tony Abbott says he has "no specific intelligence" he isn't kidding.

Is there anybody out there who doesn't suspect Team Abbott is secretly praying that a real act of terrorism occurs Down Under because that would be the only way the feral government could establish a shred of credibility for itself?

What gall, what cynicism, what egregious opportunism. What a crock of shit.

ISIL is a death cult, Tony? What, you mean like Christianity, like Catholicism, that intellectually and morally repugnant ideology where people pray to the graven image of a dead Jew? 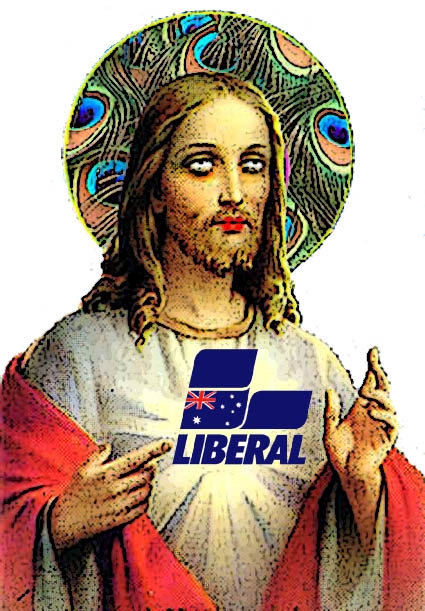 But apparently a few thousand Iraqi or Syrian or Martian bad guys are hell bent on targeting rubbish bins nationwide.

Strangely - or not - the PM denies the obvious and shrugs off suggestions that Australian military involvement in Syria and Iraq increases the threat of terrorism, perceived or real. Dickhead.

It's no great secret that for decades US, UK and Aussie complicity in violence in Afghanistan and Iraq is the central driving force for increasing "terrorism" globally.

And demonstrating its capacity for shooting itself in the foot, Team Abbott has cancelled around 50 or 60 passports from suspect Australian citizens, preventing them from heading overseas to join the fun in conflict hot-spots like Syria and Iraq.

Fifty Aussies who apparently have the "intent and capability" of doing something nasty are prevented from leaving the country. So they remain stuck here, at home, in Australia, their intent and capability - whatever it may be - frustrated by the Abbott government.

And the G20 is about to be held in Cairns.

Hmm, can anybody else see a problem?

But Triassic Tony reckons a heightened "security presence" here there and everywhere would protect "this marvellous country of ours, a beacon of hope and opportunism for people from all around the world"... people the Abbott government kidnaps in international waters and imprisons for time untold on Manus Island and Nauru where asylum seekers slowly go insane, attempt suicide or are murdered.

Now that's what I call a crisis. 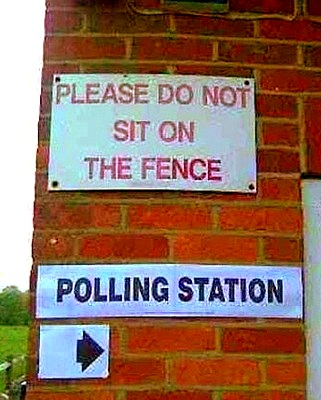 Meanwhile, back at the ranch, another crisis is brewing for the Fiberals, with Assistant Treasurer Arthur Sinodinis emerging from his latest appearance before the Independent Commission Against Corruption (http://www.icac.nsw.gov.au/ ) and taking no responsibility for the money laundering of dirty money while he was in charge of party coffers.

Wow, really? He was head of the State Fiberal Finance Committee. If he's not culpable then I guess he's merely stupid.

And yet another dirty Fib MP has resigned, sprung for corruption involving party political pigfuckers.

And this from an enquiry into political party corruption established 5 years ago by a Fiberal government aiming at further discrediting Labor's years in government (http://www.abc.net.au/4corners/stories/2014/06/19/4028997.htm), never suspecting the dirty money trail would lead straight through State Fiberal Party HQ.

ICAC has exposed massive corruption in both major political parties and shown that Australia is heading down the road of the mighty USA where politicians spend 80% of their time lobbying for financial "donations".

Still, even if Arty's memory is shot, at least he can still fake basic arithmetic, unlike our feral Treasurer and proud Top Gear enthusiast Smokin' Joe Hockey, who was last seen sulking behind the garden shed stuffing his face with cannoli.

Terrorism? You mean unilateral US air strikes, missile strikes and Predator Drone hits on "suspects" that have no UN security council approval and are therefore illegal? THAT terrorism?

Ah, fuck I can't keep up with this platinum bullshit.

There were no terrorists there until the Bushniks invaded in 2003, destroyed the nation, overthrew the government, had Saddam Hussein killed, created a failed state and opened the sectarian, vendetta floodgates for every man and his dog.

9/11? That old red herring? Who knows? The enquiry into that disaster was a whitewash so we'll never know the details but the short explanation was always obvious: blowback.

Unless, of course, you actually believe the official, government-approved version of events.

If so, I have a perfectly good second-hand bridge to sell you.

Oh and then there's Israel, its 7 decades of Zionazi aggression, theft and expansionism and its six-years siege of Gaza by land, sea and air at the expense of Palestinian lives and livelihoods.

Oops, sorry, this item is off the menu, please try the chicken.

Don't give me that Murdoch-patented bullshit that decapitating somebody is more evil, barbaric and inhuman [*insert preferred descriptor*] than blowing people to sheds with shells, missiles and bombs. FOR YEARS, Mr President.

The poor bastards recently beheaded by IS, ISIL or ISIS or whatever it is are clearly collateral damage (to use the language of the US military).

Hell, I thought we don't do body counts.

Osama Bin Laden must be chuckling in his watery grave or wherever he really is (Probably in a luxury nursing home in Austin, Texas).

Now, to be honest, I don't know whether Australia faces a "likely" terror attack or not but I do know Tony Abbott and his colleagues are chronic liars and therefore, as far as the current "Terrorist Alert Level" and "Iraq crisis" are concerned, they can all go take a flying fuck at a rolling donut.

Neither Abbott nor his crooked chorus give a shit about the suffering of innocents in Iraq at the hands of ISIL or anyone else.

Team Abbott's sole purpose in crying woof-woof is to deflect attention from his government.

The pigfuckers tried it on with the disappearance of Malaysian flight MH370, then with the shooting down of MH17, now with IS, suddenly rediscovering the plight and suffering of Iraqis.

So many bad guys, so little time before ICAC's final report on party political corruption. 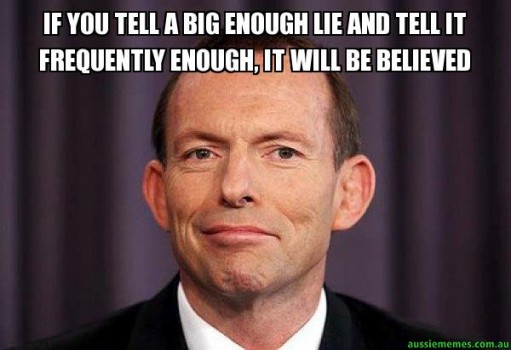 Oh, the humanity. Not.

Precedent confirms that nothing Team Abbott says can be believed. Full-stop.

If Abbott says IS is a threat to Australia, he's lying.

If Abbott says he hasn't ruled out sending Aussie troops into battle in Iraq or Syria, he's lying.

If Abbott says he has a "clear objective", he's telling the truth.

His objective is to manufacture as much distraction as possible from the Fiberal Party's dirty deeds Down Under.

And with Labor's "bipartisan support" for enlisting in Amerikkka's latest Coalition of the Weasels, don't expect a return to reason any time soon.

What you can expect is lots more civilian deaths from "humanitarian" air strikes.

This was Max Gross for Xenox News, chalking up the $20 billion cost of Team Abbott's proposed Japanese-built (You read that right) submarines, $12 billion-plus for F-35 Joint Strike Fighter jets and the quarter billion per every 6 months of Operation Distraction in Iraq.

It's obviously all money well spent by Phony Tony during this time of dire budget emergency and economic crisis.

Good night, thank you for your attention and fuck'em they're all cants out there.

You were bold enough then. You said 'everything was lawful, and how frightened you are now. Won't you have some lemonade? I'll ask for some at once. It's very refreshing. Only I must hide this first. 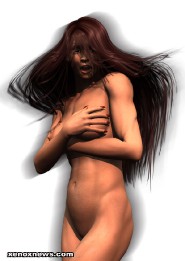