Well, that's that. With four state premiers supporting Howard's obscene new "anti-terror" legislation it's implementation is a certainty. Nothing we do or say can stop John Howard's Feral Government now. The next 10 years have been given over to arbitrary arrest
and incarceration without trial, not to mention an expanded "new" sedition
law... of which we know little because PM Howard is gleefully keeping all he
can secret.

This latest nonsense from Howard about receiving sudden "specific information about a terrorist threat in Australia", so neatly coinciding with his disgraceful parliamentary agenda, is breathtaking in its brazeness. 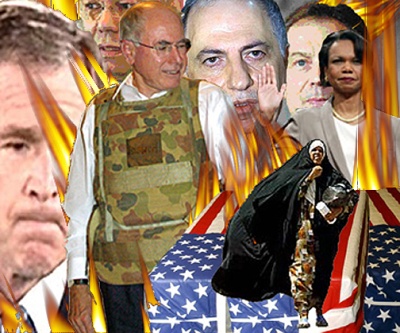 Today's amendment to Howard's wordy yet invisible legislation means "people can be charged even if they are o­nly considering carrying out a terrorist act, but have not yet decided when or where", according to o­ne report.

“Considering”?! What's this involve, then, telepathy? Is ASIO is able to read minds?!

Our politicians have abandoned us. Sauron has won.

No amount of outraged emailing, letter writing, phone calling, demonstrating or blogging will make an iota of difference to what happens next (in fact, all of the above may well be enough to prompt a knock o­n the door by some bumbling spooks?).

Australia has been hoodwinked, hijacked and hog-tied.

"Do your worst mates! I'm the bloody monitor!"

Ned Kelly as he confronted the police at Glenrowan.

Howlings of the Depraved.

Prepare for lift off

BE AFRAID, BE VERY AFRAID

The shame and sorrow and bliss, of the recycled sewage kiss