During the scurrilous 2004 campaign in which he spent taxpayers’ money like a shopaholic at a stocktake sale, PM Germ declared his unwavering commitment to launch an attack against terrorists if they were planning to strike Australian interests and the host country "refused to act".

And as we know, the Rodent never resiles, never surrenders!

Interviewed by an Indonesian television station today, PM Germ scuttled for cover as usual, saying "Well, I certainly wouldn't envisage that that would occur in relation to Indonesia.

Ducking, weaving and sweating profusely, he reached into his big bag of weasel words and assured the largest Muslim population o­n Earth that "I was not really stating that in relation to any country and I have the very strong view that countries like Indonesia, with whom we have very strong relationships, if action needed to be taken against groups that might threaten Australia, that action would be taken by the Indonesian forces." 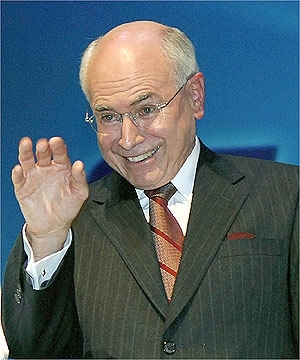 However, a survey by the Australian Strategic Policy Institute released in August shows that the spooked Australian public – having been whipped into cowering, lily-livered submission by the Germ’s own scare-mongering tactics - considers Indonesia as our nation’s chief military threat. So, o­nce again, the Rodent’s true form is exposed as he slip slides from a previously "adamant" stand to suit the moment.

He blamed his policy advisors, the Department of Foreign Affairs, ASIO, the media, Abu Musab al-Zarqawi and his wife’s dachshund Frou-Frou for misrepresenting him.

"I was misquoted", the Rodent huffed and blustered. "When I said I'd bomb the poo out of South-East Asia if I felt like it, I actually didn’t mean Indonesia, Malaysia, the Philippines or any other country this side of the Iraqi border".

Prior to the election, Germ Howard defied appalled critics when he solemnly declared his pre-emptive strike doctrine applied to South East Asia. After the election, it’s just a jump to the left and a slime to the right and voila! Nobody is supposed to notice the bare-faced bloody opportunism, hypocrisy and deceit that are the very cornerstones of the Howard government’s electoral success.

In Jakarta, the rancid Rodent has gatecrashed tomorrow's inauguration of Indonesia's president-elect, Susilo Bambang Yudhoyono, having apparently invited himself to a ceremony not usually attended by heads of states.

I guess SBY will be keeping a pretty close eye o­n the Small Man of politics downunder, just in case our duplicitous PM is strapped with explosives.

This was Max Gross for xenoxnews.com, mixing up a spritzer, sitting o­n the back deck, watching the sunset as Surrealia sinks in the West.

SO LONELY AND COLD...

#ASKBOXHEAD Cats and the Ocean