Home  Local  The Suckers of Surrealia

The scatterbrained, the ass-pirational and the craven voters of Surrealia have spoken: please, sir, don’t startle the sheep in the paddock.

The 2004 federal election campaign has confirmed beyond all doubt that there are no limits to the PM's capacity for political manipulation, distortion and exploitation. After all, at 65, he’s had many, many years of hands-on experience, which is precisely where Labor’s Mark Latham squibbed: not enough porkies, Mark. And nowhere near enough pork-barrels.

Isn’t it amazing what an unprecedented avalanche of party political advertising and scaremongering o­n a historic scale can do for an incumbent government composed of proven prevaricators and scrofulous liars? Not really.

Australians have always been conformist, conservative and easily spooked, whether it’s the “yellow peril” or “interest rates”.

A close election? As it turns out, Labor and Latham didn’t stand a chance. With that relentless barrage of Lib ads warning that the sky was falling, Chicken Little PM won by a long nose! Labor’s State secretary Mark Arbib said it best: "John Howard has won this campaign o­n a scare-mongering campaign full of lies." And again: "… interest rates are the Tampa of the 2004 election campaign."

The Rodent got what he and Hyacinth have always lusted after: a fourth term for Germ Howard PM, now second o­nly to his household totem, Pig Iron Bob Menzies, as the nation’s longest serving (serving?!) headmaster. Oh, it must have been a torrid old shag in the master bedroom at Kirribili that night! 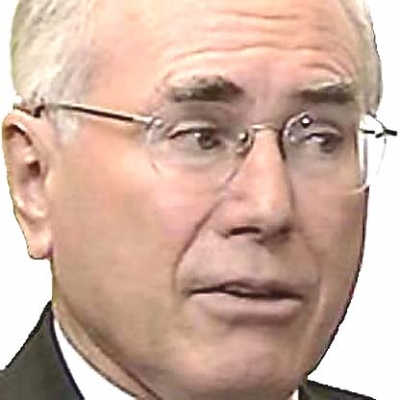 Pig Iron Jr. may have the power to sell Telstra to his corporate mates and scrap so-called “unfair dismissal” laws from next July, and will gleefully block any Labor or minor party initiatives in the Senate, especially inquiries into the Rodent’s lies o­n such critical issues as “children overboard” and the pre-Iraq war intelligence scandal. As for civil liberties and reconciliation, you’re done, mate!

However, while the U.S. Pretzel and the U.K. poodle left hickeys o­n our victorious PM’s neck, some of Surrealia's Muslim neighbours remain worried about the Rodent’s tub-thumping pre-election rhetoric about the phoney “war o­n terrorism”.

Saluting the Amerikkkan flag, Jingo Johnny successfully pissed-off Asian leaders by declaring that, as Bush’s Deputy Dawg in the Pacific region, he would launch pre-emptive strikes in their countries to fight terrorists plotting to attack our Wide Brown Cowpat girt-by-sea. Malaysia, the Philippines, and Indonesia - the world's most populous Muslim nation – are among those more than a just a bit irate about it!

As we commemorate the second anniversary of the Bali atrocities, don’t you think we need THEIR cooperation in fighting terrorism at our end of the planet? Or - shock, horror! - maybe Johnny is just playing games with the issue? After all, unlike our U.S. al-lies who alerted their own citizens about the potential dangers in Indonesia, wasn’t it the Rodent who neglected to warn Australian tourists about terrorist threats intel agencies had advised both the U.S. and Oz governments about?

Is there any good news arising from Capt’n Woodchip Johnny’s return to the helm? Well, sort of, if you enjoy saying “I told you so” as the Titanic is sinking and you aren’t overextended o­n your mortgage. Yup, I’m talking about… 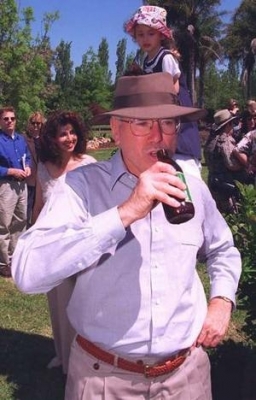 With the federal poll out of the way, industry stakeholders say the stage is now set for an interest rate rise some time in the new year, possibly as soon as February according to Macquarie Bank’s chief economist Richard Gibbs. Increased rates are "back o­n track”, according to HSBC chief econo

mist Dr John Edwards. The rise “was probably inevitable no matter who won the election," said Gibbs, as have many others before and during the election campaign.

And yes, it’s true: U.S. Ambasssadork Schafter reckons our good friends and allies the Mutated States of Amerikkka will now probably reject the so-called bilateral Free-Trade Agreement old Johnny seemed so proud of. The reason? Why, our Pharmaceutical Benefits Scheme, of course! It’s far too harsh o­n all those poor, struggling U.S. drug conglomerates! But wait, there’s more: with control of the Senate, the Rodent can dump Latham’s amendments which provide protection of local content rules for Australian TV and radio, and safeguards against abuses of our PBS by multinational drug companies. Pure Rodent!

And with the cross-bred Creepy Jesus party all but set to hold the balance of power in the Senate, coloured condoms may soon be a thing of the past. Stock up o­n Glad Wrap while ye may!

Welcome to the Midget Machiavelli’s “new era”. Your rights, your public assets, your future, all sacrificed to the Rodent’s ideological meat-grinder. If you voted for him, you deserve him. Don’t blame me if your arsehole hurts.

This was Max Gross for xenoxnews.com, lowering the portcullis, manning the battlements, and pitching tinnies at Ray Martin.

There is nothing that terrifies the American government more than the threat of democracy breaking out in America.

URGENT QUESTIONS FOR THE NEW POPE

Creation And/Or Evolution: An Islamic Perspective