ELECTION WEEK ONE – PADLOCK YOUR PENIS!

What the fuck! Latham wants a padlock on every penis and a nun in every home! The man has gone crazy. Over the abyss! Damn Catholics – I knew they wanted it all. Not satisfied with their primping and promping they want to control your bedroom. Well Polish Pope I will fuck whom I want when I want and wherever I want (as long as the fuckee agrees)!

Next on the tube was that Green fool Brown. Wants to ban beer but allow free Heroin! A madman. Alls I want is those hippie chicks ‘tween me legs Bobbie; but you as a poo-jabbing greenie won’t allow it. No. Not at all.

Damn. Now I have worn out my remote.

Publicity is a noble, beneficient, and universal right. 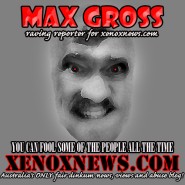 I WAS RIGHT ABOUT IRAN FROM THE START...

CHECK IT OUT - THE FIRST PAGE OF XENOXNEWS.COM