"I think somebody who has the track record of loyalty that I've had for the cause of the Liberal Party is not really required to answer that question."

No, that wasn't Lib Deputy PM Peter Costello yesterday talking about Lib PM John Howard's decision (and he IS such a decisive fellow, isn't he?) to remain Captain of the Ship.

It was Slippery Johnny himself, just after the 1984 election that re-elected Bob Hawke's Labor government, speaking at a joint press conference after the Liberal Party caucus re-endorsed the leadership of the then Lib Opposition leader, Andrew Peacock, and HIS then deputy, John Winston Howard.

Yesterday, Costello used virtually the exact same words when asked to rule out a future challenge of Howard's leadership.

And so we jaded punters wait with bated breath and broadening grins as aging egos swell and bright daggers are sharpened.

As even the loyal deputy now realises, Slippery Johnny (aka the Suckhole of Steel) has earned one right between the shoulder blades! 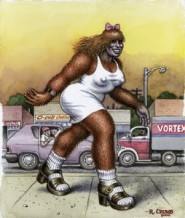 A winter night horror: The awful vampire of despair

GET TOUGH ON CRIMS!

ALL THE EVIDENCE WE NEED!