In a secret e-mail document leaked today, it was revealed that George W. Bush is working closely with the Borg entity to absorb several countries around the world and make them U.S. states. The plan, code named "USsimilate" , has a different approach for every country.

The email document also showed hard evidence that the ussimilation of Australia had already begun. The documentation cited the rate of increase in US syndicated fast food chains, the decline in public ownership of public assets, the pulling apart of the social safety net in health/education/social security, and the flooding of Australian media systems with American content.

"Indeed," quipped the commentator, "Thanks to television, most Australians know more about the American Legal and Justice System than they do of the Australian system. Some are even under the mistaken belief that Australians have constitutional rights!"

The documents showed the escalation of Australia's armed forces was to be paid for by the sale of the national telecommunications carrier Telstra.

It also showed that the preparation of the political landscape for the US Republican Party was to occur, with the bulldozing of the Australian Democrats.

"This is a neccesary step forward for democracy, security and international peace," read the document, "So that no Terrorist or Democrat should stand for election in a place where we can't fix the ballot decision."

When asked for comment today, a spokesperson said, "Prepare to be Ussimilated, resistance is futile!"

I think one of the reasons I'm popular again is because I'm wearing a tie. You have to be different. 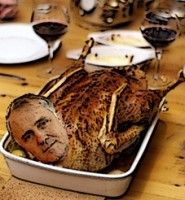 2002: The Year of Living Ignorantly

SO, HOW IS THE NEW BAGHDAD?