ABC show Chasers War on Everything cast were arrested today after their cavalcade rolled through the heaviest security operation this country has ever seen.

The troope were only stopped when Osama Bin Laden jumped out of their car and started prancing about. 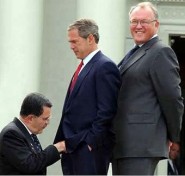 SILVER SPOTS BOILED IN FRONT OF MY EYES

The Disabled Bludgers And The Kindly Plutocrats