Has there ever been a greater admission of failure by an Australian government?

The reactionary Morrison LNP government is threatening Aussies attempting to fly home from India with 5 years in jail or a fine of up to $66,000 after dribbling idiot Health Minister Greg *unt made the unprecedented decision with an emergency determination under the Biosecurity Act that he did NOT implement for the UK or USA when those countries fell off the Covid-19 cliff. India has become the first in the world to report more than 400,000 daily Covid-19 cases. Experts say the real death toll may be far higher than the official figure. “People dying in hospital corridors, on roads and in their homes. Car parks have been turned into cremation grounds, while desperate families scramble to find medicines and oxygen,” reports The Guardian.

Virus evolution is expected and the more the virus circulates, the more opportunities it has to mutate.

The Australian government’s India travel ban is a clear indication the nation’s hotel quarantine system “is not working”, according to the Australian Medical Association, and doctors and epidemiologists say the ban proves the government has no faith in the quarantine system, despite the prime minister’s declaration of being chosen by his god.

Pastor Disaster and his fellow grifters have made it quite clear they have no interest in fulfilling their constitutional responsibility for quarantine.

LNP governments discarded their duty of care for Australians decades ago anyway.

Yes folks, while globally new Covid-19 cases increased for the tenth consecutive week – with more than 5.7 million new cases reported in the last week or so and 36,000 Aussie citizens stranded overseas because of the pandemic – here in Australia the federal LNP government continues to reject calls from state premiers and health professionals to construct purpose-built quarantine facilities. “Public health experts earlier had pleaded with the nation’s political leaders to find an urgent fix to the problems with hotel quarantine, while the Western Australian government had called on the commonwealth to repurpose immigration detention facilities and airbases,” one news report stated.

Morrison’s self-entitled, self-serving mob had 15 months in which to fulfill their constitutional responsibility and establish quarantine centres since he beat the World Health Organisation in declaring a pandemic back in February 2021. They refuse, even now, to do so.

In fact, they were warned of the virus by CSIRO scientists in late November 2019 but still took 3 months to close Australia’s borders. And then they let the Ruby Princess cruise ship offload its infected passengers in Sydney and the rest is… history.

Bloody LNP couldn’t organise a root in a brothel anyway (even though they could in Parliament House).

That is what we get with a Pentecostal fanatic as prime minister who last week flew – on a taxpayer funded government plane – to an evangelical Australian Christian Churches rah-rah-fest in Queensland and proclaimed he was doing “God’s work” and he – and his wife! – were “chosen” by God. Further proof of his derangement was the reported admission that “I’ve been in evacuation centres, where people thought I was just giving someone a hug and I was praying. And putting my hands on people in various places, laying hands on them and praying in various situations.”

Well, fuck me, Jesus! Yes, he seriously said so, even though he later claimed he never did. Too bad for the Liar from the Shire that it was widely reported and circulated on video for all the world to see and hear.

Pentecostals believe in absolute absolutes, such as the “gift” of meaninglessly babbling in an imaginary language, that the world was magicked into existence in seven days, that somebody called Noah took kangaroos – but not unicorns – onto a big boat he had built after he heard a voice warning him the world was about to be drowned. Like many Christianists, Pastor Promo just cherry picks bits of the Bible that match his world view and ignores the rest, for example the bit that says “Thou shalt not bear false witness”.

According to other Christians, Morrison – that Mammon-worshipping fraud – is doing Satan’s work.

In fact, Morrison and his fellow end-of-worlders are aiming for theocracy. Don’t believe me? Look up The Seven Mountains Mandate, a far Right Christianist strategy of political and cultural infiltration and conquest.

If that’s what Morrison and his fellow nutters want they should go live in Saudi Arabia.

This bullshit obscurantism started with Opus Dei Tony Abbott. Morrison ramped it right up with his ongoing death cult ravings. And yes, he is clearly insane.

One thing is plain to see. Morrison’s actions prove that he doesn’t have a moral bone in his pampered, privileged body.

And speaking of morality, after 20 disastrous bloody years trying to defeat the Taliban in Afghanistan, the US is finally retreating, with Australia – as always – dutifully doing the same. The Taliban always knew the foreign invaders would eventually leave and so they have, abandoning locals who assisted them in their blundering efforts to impose “democracy”.

SBS online news reports “The US is estimated to have spent more than $2 trillion USD in Afghanistan in the past two decades, according to the Costs of War project at Brown University, which documents the hidden costs of US military engagement.”

Ironically (or something) the Taliban are now at their strongest since being ousted from government by the US military incursion in 2001. What a pointless waste of blood and treasure.

Yet, in another attempt to distract from eight years of LNP government incompetence, failure and corruption, the “drums of war” with China are apparently beating and being rubber-stamped by all of Ruprecht Merde-Orc’s propaganda outlets.

Home Affairs secretary Mike Pezzullo – who lusts after the top job at Defence – in his Anzac Day message to staff declared that Australia must strive for peace “but not at the cost of our …precious liberty”, whatever the fuck that means.

If it comes to a shooting war with China, Pez and Obergruppenfuhrer Kartoffelpuffer should be in the front line, preferably strapped to a nuclear missile a-la “Dr Strangelove“.

Sure, Morrison belatedly agreed to meet Ms Higgins – in his office, just down the hall from where she was raped – but what was said? Did he issue veiled threats to shut her up? Did he offer her preselection for a safe Lib seat?

Now to PM’s recent embarrassing appearance at a virtual summit on climate action convened by POTUS Biden, where Scummo preached to world leaders that future generations will “thank us not for what we have promised but what we deliver,” bullshitting about plans (or was it a plan for plans?) for Australia to produce the world’s cheapest clean hydrogen using fossil fuels FFS rather than renewable energy sources such as wind and solar! But my god told me…

Naturally, Scummo refused to join other leaders in pledging to upgrade their emission reduction targets. In fact, Australian governments spend more money each year subsidising fossil fuels than we spend on the Australian Defence Force.

Remember when Morrrison gifted $43 million to his loony mentor’s Hillsong cult after refusing to grant NSW Rural Fire Service with a measly $20 million for 4 airborne water tankers? When the next catastrophic firestorms burn half the country to the ground again I guess we can all just wave our arms in the air, babble in tongues and pray to Scummo’s god: Mammon!

With the rest of the world moving away from fossil fuels and establishing renewable alternatives, Australia will shortly find itself ostracised and penalised for its intransigence. Add to that China’s boycott of Aussie products and we are well and truly stuffed. Well done, Angus!

And with global warming causing glaciers to melt and the Earth’s axis of rotation to shift, maybe Pastor Scummo is right about End Times? Unfortunately zombie Jesus will not be popping up to save anybody.

Australia could have dodged a bullet in 2019. Instead, it shot itself right between the eyes and voted the crooks, creeps and crackpots of the LNP back into office for a third term.

You CAN fool some of the people ALL of the time as Scummo very well knows. A handful of idiots is all it takes.

Now let us all bow our heads and pray… for the demise of Morrison and his cronies.

And just a parting thought.

I saw an article on whales recently that said “Whales help the planet stay healthy in a number of ways. As they surface for air they release huge faecal plumes, nourishing the ocean and helping to support the food chain. They even help the environment after they die, with their carcass feeding almost 400 different species of marine life!”

Which begged the question, what purpose do humans beings serve as they ransack and ruin everything within reach? 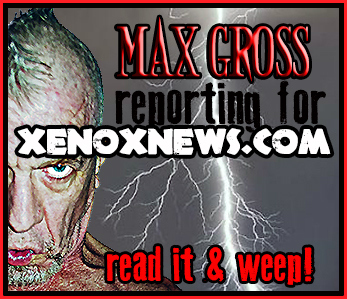 I am getting so far out one day I won't come back at all.

What we need: Another Cultural Revolution

Max Gross Watch - Lookin for Joos in all the wrong places