ROTTEN JOHNNY, THE KIRRIBILI CANKER
Despite mass public protests of historic proportions, Aussies are being dragged into an American military/oil industry invasion of Iraq by a deceptive and deluded Prime Monster whose lust for sharing the (as he imagines it) limelight of the global power elites (i.e. the United States of Amurderer) knows no bounds.

Xenox News Raving Reporter Max Gross pulls off his muddy Blundstones, stretches his legs, pops a frosty Coopers and sinks into his favourite bean bag to pick some old scabs.

Australian Prime Monster John Witless Howard's long, malodorous political career is distinguished by his well-honed skills of dissembly, deceit and division, and his eager brown-nosing of foreign powers. Despite his many overseas jaunts, this is no worldly statesman, no man of honour, no selfless leader standing up for the nation's best interests. This is a visionless, narrow-minded, self-absorbed, cardigan-wearing milkbar owner gone feral. Like so many in his party, he has lusted after his current role for so long he has lost his soul, and possibly - as with the current US Presidunce George Dumbass Bush - his sanity.

Unprovoked, they both want war and they want it now, regardless of the facts, consequences or cost. These ego-driven, power-hungry jerks are certifiable. They must be consigned to history's garbage bin asap. Thank goodness other nations are coming forward with alternative options to the US plan for outright war. 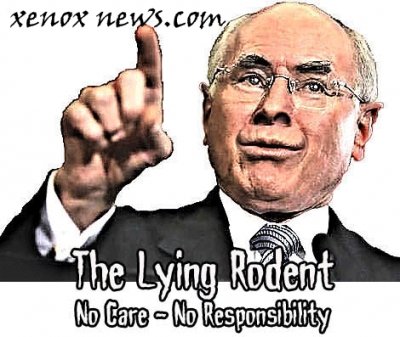 Often written off as dead, John "Lazarus" Howard was resurrected by a discredited and desperate LibNat ship-of-fools wandering in the political wildenernss. There was simply no-one else on the conservative right to take the helm of Australian's wealthy, born-to-rule shit-for-brains dollar fellas. Lazarus went on to win the Prime Minister's office after a campaign of blatant pork-barrelling and outright lies: a well-established tradition of conservative conmen.

The phrase "never ever" is the universally recognised descriptor that exposes the PM's current mendacious antics any time it is spoken. There's many a dagger in the back of former colleagues with Howard's fingerprints on it. And there's more than a few refugee corpses lost at sea because of his policies.

Because of Jerk Howard we lock up traumatised men, women and infants in desert and island concentration camps. Sickening to note that many of these poor buggers come from - wait for it - Iraq and Afghanistan, the very hell-holes our mean and tricky PM shits on from a great height in the name of political expediency.

The stench of moral corruption in Australian politics has never been more disgusting. One can only hope that one day the Labor opposition will take off its gas mask and offer the electorate a clear and honourable alternative to avarice, iniquity and hate. And meanwhile we watch the corpse of the body politic rot.

Rotten Johnny is a self-proclaimed nationalist but we all laughed like drains to hear him claim the role of "the battler's friend". He wouldn't know the price of a bottle of beer. His true peers are not here but dwell on foreign shores. And thats just as the Little Man of Oz politics prefers it.

During Australia's historic bicentennial of federation celebrations, the Prime Monster jetted to London to "celebrate" with the Queen of England and her entourage in the British parliament. Like his sly mentor Pig Iron Bob Menzies - the Australian PM who during WW2 infamously sold Aussie ore to wartime Japan - Howard hankers not for the approbation of the Australian electorate, but for that of (as he obviously perceives it) his ilk, his betters, his masters. Janet Bucket insists! 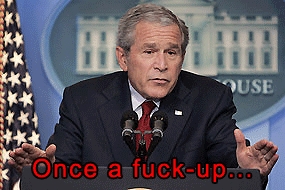 Global protests over the weekend attracted millions of people from all backgrounds and beliefs. There were even Muslims involved! The mass demonstrations that helped put an end to the American assault on Vietnam were surpassed as people who had never before taken to the streets saw fit to finally do so. More protests will come. They will be bigger. They will be undeniable. They will be effective as the discredited leaders of three "western" nations fall from grace.

Did I say grace? Sorry, I meant disgrace.

Despite the increasingly belligerant, bizarre-sounding rhetoric of the isolated US administration in Washingtoon - so faithfully parroted by our very own mendacious midget of a PM, and the UK's unfortunate PM Tony Blah - most of us realise that there is NO reason for a military invasion of Iraq. The historic US penchant of "taking out" leaders of sovereign states that happen to disagree with US foreign policy must be opposed by everyone, everywhere. More so now than ever.

I remind viewers in the USA that this is NOT a movie. This is - to paraphrase our suprisingly ocker PM on his visit to Washingtoon - "fair dinkum" (The PM's minders obviously made him watch "Crocodile Dundee" during the flight over). 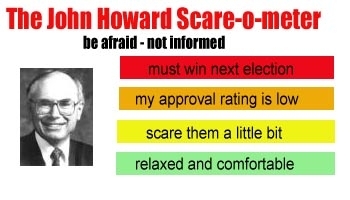 Does that make you feel relaxed and comfortable? Perhaps it makes you feel alert but not alarmed? Or maybe you're thinking that the atrocities perpetrated by passenger plane hijackers in New York, Washingtoon and Pennsylvania on 11 September 2001 were... what? FIRST STRIKES?

In that case, using the Bush administration's own argument, the mass murders were jusitified. After all, we wanted and continue to want Osama Bin Laden's head on a platter, right? At any cost?

Hans Blix and his  team of United Nations weapons inspectors are fulfilling their internationally appointed role of identifying any global threat posed by Saddam Hussein's pissant dictatorship. Forget the farcical US claim of a link between Hussein and Bin Laden (Why do they keep churning out these blatant furphies?). Osama's latest "broadcast" made it pretty obvious what he really thought of the "infidel socialist" Iraqi dictator. 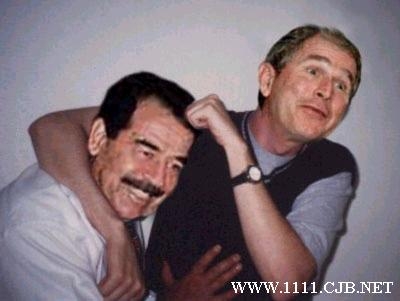 Taking a leaf of Americas' own well-thumbed book, Osama - if that really was him that is -simply pushed for what the US has demonstrated for at least the past 50 years: the enemy of my enemy is my friend. And what's good for the goose... well, we'll get to that old chestnut in a minute.

Alrighty then! The fact is that the only nation jumping up and down demanding war, abandoning international agreements, flouting treaties and global protocols, threatening its neighbours and defying the United Nations, is the Mutated Snakes of America. Why? Because - as its salivating, flag-waving supporters keep telling us so proudly - because it CAN! Duh!

But how about this? The only bloke more eager for a US attack on Iraq than the insensate Pretzel Prez is... the long lost Osama himself. Now THERE's a link!

In his reports to the UN, Hans Blix has stated several key facts quite clearly: no "weapons of mass destruction" have been found in Iraq; no nuclear weapons program exists; and Saddam Hussein must cooperate more with the UN process (The same may be said of the cuckoo US, its addled UK poodle, and its Aussie Mini Me).

As long as the inspections are in place, as long as the UN process continues, Hussein threatens no-one outside of arm's length. In time if anything's there, it will be located and destroyed. That's the whole idea, right?

And after that the inspection team can continue its task by insisting that Israel comply with certain long-ignored UN resolutions too. Or "face the consequences". No doubt we can whip up a "coalition of the willing" to whip Sharon into shape. Surely the lives of Palestinians are as valuable as Saddams' poor, oppressed Iraqis that the US is suddenly so concerned about?

Yeah sure! And Turkey gets billions in US aid while the Kurds get shafted yet again.

This was Max Gross for xenoxnews.com, scratching his yarbles, hauling himself upright to stagger out for another cold one, and losing count of the number of nations refusing to comply with UN resolutions. 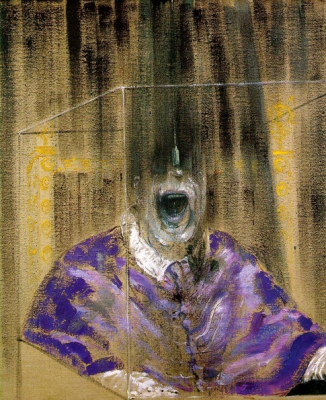 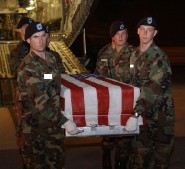 AUSSIE DIGGERS UNDER FIRE FROM TERRORISTS!

OH TZIPPI! WHAT HAVE YOU DONE???

The only 'Void' is the one we live in