In a display of rank cowardice Australian Prime Minister has announced that she will withdraw Australian troops from Afghanistan.

Australian PM Gillard - betraying the Diggers who gave their lives for freedom and democracy in Afghanistan.

Only days after a vicious Taliban assault against Australia’s putative allies in Kabul, the Aussie PM has seen fit to cut and run just when her friends in London and Washington need her the most. This must rank up with Victor Quisling as one of the most disgraceful backstabs in history. Not only is she betraying our Allies in the fight on terror and Islamofascism, but also the people of Afghanistan. They are now left to think that the Australian people would prefer to have the medieval Taliban controlling them rather than being liberated for freedom and democracy.

You can be sure Iranian dictator President Madmanahmed is smiling about the cowardice of PM Gillard.

With her standing with the Australian public already nose diving, Gillard has again tried to appease the loony left with this outrageous announcement. One can only wonder what is being said about her and her Government in the halls of the Pentagon and Whitehall. At least they know that in opposition leader Tony Abbott they will have someone who doesn’t cut and run at the first opportunity. And with the Australian opinion polls they way they are now, hopefully it won’t be too long before he is PM and sanity restored to Australia’s foreign policy.

Being shot out of a cannon will always be better than being squeezed out of a tube. That is why God made fast motorcycles, Bubbaâ€¦ 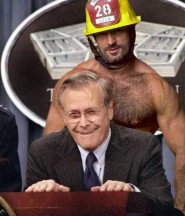 THE VILLA IN THE JUNGLE