In a few short days Australia’s Government will undergo a change that was never supported by the majority of clear thinking aussies. The Senate will be taken over by a fist full of watermelon greenies ready to force their agenda of socialism and born again environmentalism nonsense on us all!

And with the willing compliance of Australia's most inept PM, ALP leader JuLIAR Gillard, it won't be long before hard working aussies are paying more for their petrol, food, water, and power. Not only is the Carbon tax going to be forced on us but you can be sure boatloads of illegal immigrants are lining up to flood our shores knowing that the bleeding heart greenies will force the clueless ALP government to accept them all and allow them access to our already overrun welfare system.

Check out what the ALP and the Green loonies have planned for your backyard - monstrous 'Wind Power' machines that have been proven to use more electricity than they make!

What a joke! It took Australia's greatest PM John Howard years of hard work to build our country up to be the envy of the world, now it will be torn down by the union thug backed ALP and the pot smoking socialist Greens. They better be warned that your typical hard working aussie won't stand for their antics; most are still furious that their choice of PM Tony Abbott was cheated out of the job at the last election. If the rabid left don't stop pushing their unwanted agenda on us expect a backlash; and it will be hard and furious!

Something unpleasant is coming when men are anxious to tell the truth. 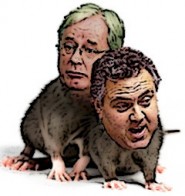 It is just not worth the risk!

THE WAY OF FREEDOM

THE LONG ROAD TO FREEDOM