Home  Local  BACK ON THE BORDERLINE?

BACK ON THE BORDERLINE? 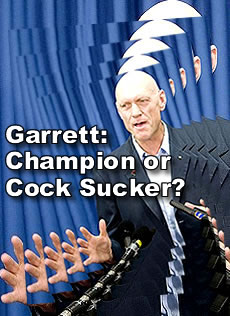 So, well, yeah...um.. Garrett decides to step in and oppose a dam on environmental grounds!

Now, why shouldn't that surprise us?

And why are we surprised? Given his track record as a minister it is, like, wow.

So has the bald one smoked up or turned a new leaf? Has he been towing the ALP right wing line, biding his time, plotting... knowing all along that when the time was right, he would fling out and don his environmental activist cape, hold his fingers out wide, stick his ears back and lead a massive transformation of the Australian Government's environmental policies? One where nature would take place of importance over greed, commerce and big industry?

There was something startling in his eyes when he made the announcement that the Traveston Crossing Dam project would not go ahead because it would threaten the Queensland lungfish, the Mary River turtle, the Mary River cod, Coxen's fig parrot and the Giant Barred Frog. ;-)

But was that 'something in his eyes' related to his plot? His BIG GREENIE COMING OUT? Has one of his old friends or band buddies had a whisper in his ear and said "Listen mate, its fucking time already OK, how do you wanna be remembered dude, everyone thinks your a cunt." Was it someone he cared for, on their death bed, that "told him".

Or has the bald one himself been told by the doc that his time is limited?

So, has there been something?

Did I just get carried away, and mistake the watery eyes, the pathos, for something other than what it is?

i.e. was it just another low down, miserable, fooling, prick of a poltician's gesture? Is there a deal behind this that we haven't heard about yet? Like, is there a desalination plant developer sitting in the back aisle with a wry grin, a nod, the hand shake and deal already done?

I ask you the reader for your interpretation. Is the cape coming out, is he going to be Australia's environmental champion, or is he still the fucking cock sucker that he became as soon as he was elected into parliament?

Tell me because I don't think that I can tell a giant barred frog from a tiny cocked toad anymore.