Jihad: definition(1); a war by Muslims against unbelievers or enemies of Islam, carried out as religious duty.(2);A fanatic campaign for or against an idea etc. crusade.

You'll never do any good as long as you've got that music on the mind. 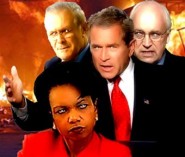 MAD MULLAHS OF TEHRAN DECLARE THEY WANT THE BOMB!

XenoxNews: All the latest on the World Cup