RUDD’S PLUNGING POLL NUMBERS: IS HE THE NEW LATHAM?

Labour opposition leader Kevin Rudd is quickly losing his gloss with the people of Australia the latest poll figures show. After a weekend where Rudd again kowtowed to his Union masters there was a clear rise in support for John Howard and corresponding decline for the dud Rudd.

These figures are now starting to reflect what was seen with another inexperienced ALP leader; Mark Latham.

Like Kruddy, there was an initial honeymoon period for Latham when the leftist media gushed over him and the Aussie public were willing to give him a chance. But once they realised how crazy Latham was, and how much better off they had become with the strong leadership of PM Howard, they flocked back to the Prime Minister.

This same story seems to be playing out for Kevin Rudd. He has had an initial burst of support once again from the anti-Howard media. But the longer he has been opposition leader the more his inexperience and inability to stand up to the union bullies that run the ALP have become obvious. Like Latham, he too has resorted to petulant name calling and the politics of envy. It seems that the Australian public is waking up again to the fact that their prosperity and livelihoods cannot be placed into the hands of Rudd and his union mates.

So, choke on that latte-sippers! I can state for a fact now: PM Howard will win the next election. And once again Australia will be in the secure hands of someone who governs for the silent majority; not the loud mouthed chattering classes.

Trying is the first step toward failure. 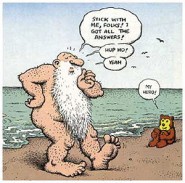 HOW THEY DO IT

What's up with Gibson's "Passion"?

Repeating The Mistakes Of Caesar's War On Terror