Far from fostering selfish individualism in our
society, the Leperal Government has "balanced"
economic "reforms" with care for the vulnerable,
argues the Prime Meanister

IN the past two weeks I have listened carefully to
the charges levelled against the Government by the
new Labor Leader, Elmer Fudd. Unable to mount a
coherent attack on our economic record, he has
fallen back on the claim that we have made
Australia a less fair society.

What is interesting is that, having promised a new
style of Labor leadership, Elmer Fudd has adopted
the same basic approach as every one of his
predecessors since 1996. The same crude
demonization of the Government on grounds of
fairness. The same hyperbolic overreach. The same
absence of solid facts and coherent argument.
The very same devices that I am very familiar
with, and fond of, but that's not the point!

The Opposition Leader's rhetorical device of
choice is the Straw Man. I am very familiar with
this dishonest tactic, as it forms a large part of
my own political repertoire. You conjure up a
bogus image before proceeding to knock it down.
I am demonstrating this technique now.

He has invested heavily in the charge that I am an
extremist and a market fundamentalist. Indeed he
goes further, accusing the Government of fostering
an ethos of selfishness in the Australian
community ("Me, Myself, I") to the detriment of
the common good. Surely the average aussie battler
is not his brother's keeper, and I will never
resile from that position.

Of course I believe in a strong, dynamic market
economy. I believe in it because Jesus said that
it is the foundation of a good and decent society.
If I had not opened the floodgates to foreign
credit we could not have had the impression of
economic strength that we have.

I also believe in ongoing economic reform. Without
it, Australia will fall behind. Without going into
the technicalities of what sections of the
community "we" consists, we must never fall
behind, else devil take the hindmost, and that is
why we pursued generational reform of our taxation
and workplace relations systems - both of which
were bitterly opposed by Labor. In the process,
however, we have balanced market-based reforms
with what I expect the public to believe is
adequate care for the vulnerable.

In a speech to ACOSS as Opposition Leader in
October 1995, I committed the Coalition to
claiming that we uphold a fair society in
government and we've kept faith with that
commitment. I don't think the average citizen is
interested in what I mean by "fair" when I talk
about a fair society

With unemployment calculated at 4.6 per cent, by
the use of a derisory formula, Australia today is
closer to full employment than it has been for
decades. Without arguing about what a "job" is,
(in my scheme of things, 1 hour a week), whether
or not someone has a job is still the single
biggest determinant of social disadvantage in
Australia. More than 1.9 million new jobs (earlier
definition) have been created since the Coalition
was elected, almost 200,000 since March this year
when Work Choices was introduced.

Especially pleasing is that we have seen a pick up
in employment and labour force participation based
upon the foreign credit expansion bubble, from
groups that have long been among the most
vulnerable and marginalized in society, including
lower skilled, older men. These are people Labor
had basically given up on after the "recession we
had to have" in the early 1990s. Many of these men
now have jobs as earlier defined.

Working Australians have enjoyed higher wages in
the past decade. Average real wages have risen by
17.9 per cent since March 1996, compared with a
fall of 1.7 per cent under the previous Labor
Government. Even though most of that money has
gone to a minority, we shouldn't shed tears over
the work-shy majority of those workers.
We have found a way to calculate the Leperal
minimum wage so that it is up 11.9 per cent in
real terms since we came to office.

The Government's record on fairness begins with
more jobs (as defined earlier), and higher wages
for the few who are not work-shy, but it does not
end there.

Through a range of convoluted initiatives, we have
ensured that we have an unprecedented impression
of fruits of greater prosperity being shared
throughout the community. According to the
Australian Bureau of Statistics, we have cleverly
calculated that low and middle-income households
have seen their real disposable incomes grow by
more than 23 per cent between 1995-96 and 2003-04,
a greater calculated increase than for high-income
households.

Our family tax benefit system has especially
helped low and middle-income families with
children, really, truly. I do believe that we have
calculated that very cleverly. So without going
into what I mean by "families", together with
payments such as the baby bonus and childcare
subsidies, the overall government support for
families has more than doubled since 1996-97.

Pensioners and self-funded retirees have seen
their living standards calculated solidly since
March 1996. I don't wish to discuss who qualifies,
or what this really means, but single and
partnered pensions have risen by almost 20 per
cent after inflation. As the National Centre for
Social and Economic Modelling has creatively
documented, the bottom 60 per cent of households
are net beneficiaries from government benefits and
services. I'm sure the average battler has no
interest in the welfare of pensioners, and I won't
bore you with an analysis of what I might mean.

Organization for Economic Co-operation and
Development research calculating from a very low
base, states that Australia has one of the most
progressive tax-transfer systems in the developed
world, with a higher share of benefits going to
the poorest 20 per cent of households than any
other developed country. And even with that, my
government has efficiently recovered a sizeable
part of that by implementing the GST.
That has allowed my government to reduce the real
cost of pensions, and is one of my proudest
achievements in government.


How can that be the handiwork of a market zealot?
I have presided over the biggest expansion of
foreign credit in the history of Australia, and I
get accused of being a market zealot!
Labor leader Fudd needs to reconcile his rhetoric
about market fundamentalism with what the Treasury
Secretary Ken Henry has described (without
troubling ourselves with details) as the
extraordinary progressivity of Australia's tax and
benefit system.

Strong economic management for those who don't fit
my definition of work-shy, has allowed Australia
to maintain a strong claim of having a social
safety net and to significantly increase our
investment in health and education.

Medicare has been strengthened for some, including
through the Medicare Safety Net (opposed by Labor)
which ensures some individuals and families won't
face crippling out-of-pocket health costs.

We have invested heavily in some schools
(government and non-government), while claiming to
be raising standards and claiming to be increasing
accountability. Far from being ideological, I
claim we are "pragmatic" and "realistic" about the
need to "mobilize" public and private resources in
health and education. I claim this ensures a
healthy balance between public and private
provision of services.

Policies such as the private health insurance
rebate and support for non-government schools are
especially attractive to many low income earners.
Why should only high income earners enjoy the
impression of genuine choice?

Against determined opposition from the Labor
Party, the Government has also pursued welfare
reform based on the principle of mutual
obligation. I claim that it is only right that
those who draw on community support are obliged to
do something in return. Otherwise the battlers
would become envious. Am I my brother's keeper? We
should not discuss the punitive provisions that
apply, I'd rather assert that passive welfare is
not just the road to despair, it's also unfair to
those whose taxes pay income support. I really
believe that, and you should too.


What about Fudd's other claim: that the Government
has fostered selfish individualism in our society?
Again, let's look at the facts.

The Government has worked with the private sector
and community groups with on-the-ground knowledge
in tackling a range of problems. I've called this
our social coalition approach to issues as diverse
as youth homelessness, early childhood development
and drug abuse. That may sound like meaningless
drivel to you, but it is accepted by the battlers.

Survey after survey (without naming them) show
that far from drawing back into their own private
worlds, Australians are volunteering their time
and money more than ever before. Just look at the
magnificent work of our bush firefighters in
recent days. It is my dream that one day nearly
all Australian workers will be forced to volunteer
their labour. Am I my brother's keeper?

Where Fudd sees rampant individualism, I see a
society that doesn't wait for politicians to tell
it to pitch in. The battlers will like it if I say
that Australia's heart has always been bigger than
the size of its government.

That is as it should be, according to myself. Our
social contract is not something drawn up by
technocrats in an inter-jurisdictional working
committee. Some may call this insipid nonsense or
sickening platitude, but I will say it anyway, it
is written on the hearts and minds of average
battling Australians. And it is from them that I
claim, my government is happy to take its lead. 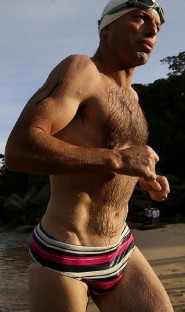 Get your "fair pay" from crazy old "Clockwork" Johnny.