Aged Aussie leader, 70 year old PM John Howard, has told Australia that he will maintain the deployment of Aussie troops in Iraq for as long as the Japanese want them.

"They are doing a mighty job driving the Nips around and hiding in their base when anything bad happens"
When asked if the Diggers could be of more use in helping their American allies in the troubled areas of Iraq the decrepit PM said:

"Look the only reason we keep the troops in Iraq is to pretend we are actually doing something in the War on Terror. Can you imagine what would happen to my poll ratings if they were involved in any actual fighting?”

He then toddled off to a Cabinet meeting.

You are either on the grid or off the grid. 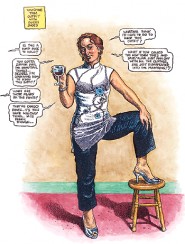 TERRORISM IN ISRAEL AND RUSSIA - WHAT'S LATHAM GUNNA DO?

On the path to death by emancipation of the primal Howardman