A local schizophrenic patient who was known to continually shout tirades against Prime Minister John Howard and President George Bush became physically violent and began attacking people at random today screaming that "nobody gives a shit" about what he had to say. "Just believe me," he cried, " I read all about them on the internet and watched them on the telly. " The situation calmed down after paramedics arrived and restrained the man and gave him his medication. Apparently he'd been skipping doses. A few weeks in a padded cell should see him right. 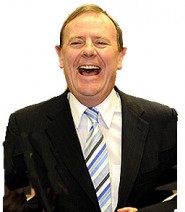 The reason why no statues are erected