Voltaire Fucked Flappers for a Franc or Two

The famous French philosophers
Wagged their tongues up any fanny.
For the delight of a quivering whore,
They could explain the universe to you.
Old Fritz thinkers couldn’t get a root to save themselves.
Kant had a cock it took a microscope to see.
While Nietzsche, like all good German men,
Would only receive while bent over the sink

If the English thought they would have had philosophers.

Spinoza, what country was that idiot from?
Like Descartes he was old and stupid and never spoke about
the gift of felching from a Spanish Virgin's arse.

Those ancient Greeks, they are my favourite Philosophers;
They never failed at all in having a root;
And any old hole would do.
Socrates sucked off Plato who fucked Aristotle who would fuck a bottle if needs be.

So there you go
A fistful of fucking philosophers
Who liked to think and fuck and fight and die
Thanks fellas.

I have always looked upon decay as being just as wonderful and rich an expression of life as growth. 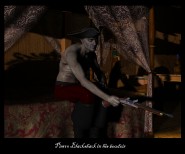