The economic winter: How false social theories rule the world

The harsh economic winter was brittle with ritual
sentimentality and brutal with subhuman policies as
it tightened its claws of free market ice around
the throats of Australians high on individualism,
privatization, and globalized environmental
destruction.

Slaughtered reform junkies picked at random from
the herd, had been scattered across the privatized
transnational landscape in an ugly carnage by a
vindictive and homicidal economic zombie. A
soulless beast of consensus politics stood
silhouetted by the infernal glow of wealth and
privilege as its dead unseeing eye sockets gazed
out upon a panorama of blood sacrifice in a
nihilistic jungle of massive urbanization.

Another triumph for the brain-rotting regime of
a parasitic wealthy elite that operates to invade
and violate others. Proof that conformism, moronic
enthusiasms, and fawning subservience cannot
prevent the violent indifference or the sucking
pull of empty productivity that is about to drag
the vulnerable through another ordeal of ruthless
power and intolerable oppression. 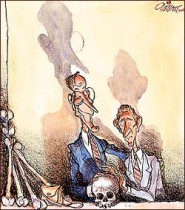 INTIFADA: NOW OR NEVER OR FOREVER

IS IT FINALLY GOODBYE?