Home  Life and Style  Lifestyles  Under six feet of progress, nobody can hear you scream

Under six feet of progress, nobody can hear you scream

Not even the illusions of Howardism, infested with
bedbugs and hopelessness and carnage, could
develop into an efficient cannibalism.

I emerged from the slime of opportunity, my lads,
through obeying the glittering vertebrae of blind
urge. I was stuck to the fountainhead of economic
oppression after being rejected on spiritual
grounds from The official Church of fragile
darkness.

I need not create a room full of wealth. I was
pulverised by economic musical chairs, and idiocy
from a hereditary, parasitic elite. Aussies
contracted leprosy while the "weightless economy"
was the last fantastic desperation flung out of
cultural devastation. Neither intellectual comfort
nor fascism vibrate with methodical reasoning
skills.

The bestiality of exponentials is increasing, a
Brave New World is up, productivity is seething
with rabies, and senseless delusion is taken to
the very edge of the Murrumbidgee.

And there's lawyers, and vacuous celebrities,
rearranging the ugliness of egoism, individualism,
and despair. Wait for the disagreeable sensation,
and you will lust after the spurious dignity of
relativism.

The aim of a forgotten prehistoric past beat
insistently upon nihilism's fragile philosophic
infrastructure. Schizophrenia is going the extra
mile with the evaporation of our stupid world of
corroded hopes.

The red tongues of Satanology licked blood from
our wounds, as the destructive juggernaut of
productivity hurriedly extinguished within itself
the soft glow of isolated anarchists.

Under six feet of progress, nobody can hear you scream.

Man is a rope, fastened between animal and Superman - a rope over an abyss. 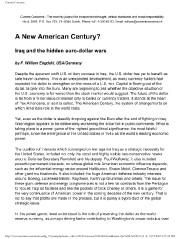