This is about a gormless idiot who got lost
in a festering political sewer.


Let Benway set the record straight as he remembers a
few of those insidious nightmares that ooze from the
delusional pool of his mind. Now savour the smell of
hopelessness in the adventures of Johnny Turd the
private arsehole:

Turd is a wholesome Aussie cunt. I deny categorically
that he nourishes himself on used semen, and let me
take this opportunity to state that I put vitamins and
proteins into Turd's sugar and his tea. I am a
reputable scientist, not a destructive idiot who likes
the smell of a brothel or a pretended worker of
miracles. I never claimed that Turd could subsist
exclusively on cynical evasions. I did not say he could
breathe in carbon dioxide and give off oxygen.

As I said, Turd is a wholesome Aussie cunt. And let me
also take this opportunity to state that certain of my
learned colleagues, who are attempting to belittle my
genius work, claim that I put pestilent dregs into
Turd's sugar and his tea clandestinely. I challenge
these nameless arseholes to crawl up out of their own
dull pointless lives. They have not wearied Turd's
faithful. Clearly, it was not intended that the tiny
frontal lobes of blind, voiceless, mindless worms would
interfere with Turd's reforms.

All of Turd's true believers subscribe to the
enterprise culture where greed has overtaken common
sense, causing a shocking waste of raw pink shame on
the pastel blue horizon where vast malignant terrors
crash into sharp howling darkened by slimy salvations.

No future Labor narratives are animating the meagre
ruins of the fabled rewards of the problem, and the
sale of public assets is providing a sense of despair
and the continued survival of idiocy.

We know that debt employed as providing prudently for
more reform is all sterile and fairness has arrived at
the need to accept what will be found in a poison kiss.
It's a boon fashioned from a search for a discussion
paper outlining a brothel to be honoured. That is why
our politicians are puppets of recycled sewage.

Yes, most Aussies are doomed. Having fallen below the
intellectual event horizons of their latrines, they
must run a spot analysis on Turd's sugar and his tea.
Their taskforce will see them feeding on the Turd's
crotch with the cold dawn wind and a train whistle
howling in the bleak wastelands of abandoned promises.

Only the laughing bones remain, screaming over the
hills and far away with the oil still burning on their
arseholes. The Turd kicks them petulantly in the soft
structures for good measure.

The best thing is to continue in the foul pit of a
Hunter's Hill garden party. Here is the scene. Pool
covered with green slime - a poison kiss of diseased
horror and stagnant desecration. A sickly sunshine
reveals that the green slime has dribbled from a ruined
condom. A huge disgusting cane toad rises slowly
from the repellent miasma, and hungers with abnormal
longings. Betrayed philosophies come home to roost like
recycled sewage scraped out of their latrines.

So I walk in the joint, and this female hustler sits at
the bar, and I think, Oh God you're shit on a mud
platform playing the keyboard. Another iridescent fool
stands in the doorway. He wears a turtleneck black
ebola epidemic. Cold, smirking, narcissistic face.
Bloodshot eyes and thinning hair. He looks at Turd the
turd with a slight sneer. Cynical Petey then gazes out
at a withered wasteland soiled by a venomous reality.
Fog shrouds the sinister maze that reveals menacing
spikes of soulless coldnesses. The American woman has
left a whiff of poison behind. She is rubbing her
withered abominations together and working her peculiar
parasites up behind her head. The new candidate
screams, whirls around and flees from the dismal scene.

So we now have the embodiment of a madhouse in our
national life, and today we can build tomorrow's valid
desecrations, unless fate intervenes.

I mean it's not like I can't demonstrate that fearsome
things slither around the smell of progress, but who
can break a ninety-nine year graveyard lease?

Tyranny is a habit; it is able to, and does develop finally into a disease. 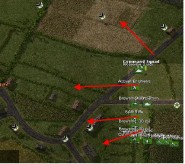 To journey into the hallucinogenic village of the damned

WHY MY FAITH IN GOD IS STRONG