Fellow Australians, now that that mean and tricky PM of ours has buckled (yet again) to US economic interests, expect to see even more shitty American TV shows and crap Hollywood movies dominating our cinema screens than ever before.

Just like the Canadians and Mexicans, we've been FTA'd right royally by Monsters Inc, USA and its ancillary corporate bodies Lobby Groups Unlimited and Protected Producers, Y'all! Free Trade? More like a Yank free-for-all!

Get ready for more manufacturing closures, and job losses and more Aussie kids talking and dressing like Yank kids.

Oh, yes, and get ready for the cost of pharmaceuticals to go through the roof.

Yep, cobbers, get ready to buy American as you never have before!

Thanks Johnny, you stupid old fucker, you've almost finished the job Keating started of selling off the whole bloody farm!

I guess sucking up to Dubya and following the Yanks in their illegal, terror-expanding invasion of Iraq didn't get you the pat on the head you thought you'd get.

Our only hope is that the Senate blocks this bullshit FTA!

Although born of "normal" sized parents Andre the Giant reportedly reached 6`3 and weighed 200 lbs. by the time he was twelve. 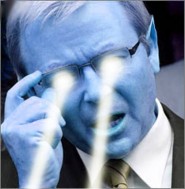 To Die For: the Greatest Intelligence Hoax of all Time

NOW THE ELECTION IS OVER…

Queensland sees the light - JuLIAR you're next!