THE BALLAD OF AN OLD THIN MAN...

Rock and Roll superstar Bob Dylan continued his ground breaking tour of East Asia by performing in the island state of Singapore last Friday night. Beneath the bright equatorial moon and the giant Singapore Eye, Bob belted out some of his greatest hits to an enthusiastic crowd that included all ages and races of this fabulous Island nation. Ably supported by a marvellous backing band, including electric guitar virtuoso Charlie Sexton, Bob showed everyone that though he maybe in the sunset of his career he can still rock out with the best of them. 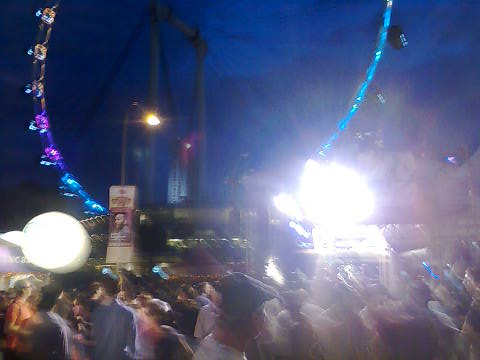 While the Singapore Eye wheeled in the distance the crowd bopped to Bob Dylan's rockin' tunes.

Displaying a rare musical mastery Dylan oscillated between the Hammond organ and guitar singing with his spare guttural voice. In between times he occasionally blasted out solos on his harmonica. Some of his vast back catalogue he sung included 70s classics Tangled up in Blue and Simple Twist of Fate as well as some chestnuts from the sixties like Highway 61, Ballad of a Thin Man, and Hard Rain.

Though with little to say to the audience beyond introducing his band, Dylan thrilled the crowd with a rousing encore of two of his masterpieces, Like a Rolling Stone and Forever Young. It left the Singaporean crowd gasping in wonder and pondering on the greatness they had just witnessed. 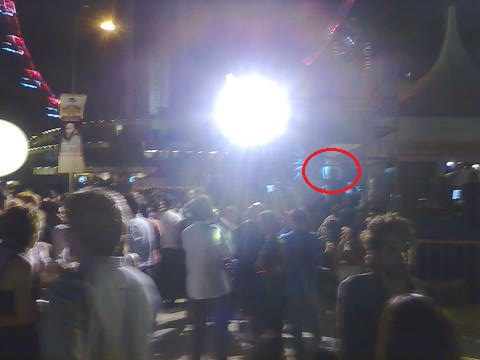 There he is, circled in red, Mr Tambourine Man live in the Island city of Singapore!

If he is passing through your town do yourself a favour and catch this maestro of song while you can. You won't regret it.

The characters in 'The Cold Six Thousand' have great depth, tragedy and grandeur but I am an American Protestant artist and I judge these characters sternly. They are morally judged at every step of the narrative.