FOUR POINTS FOR THE #NEWPONTIFF

Pope Bentdick the Sixteenth has decided to quit. That in itself is a step forward for what many regard as a moribund and anachronistic institution. To help the new Pontiff get the Catholic “Firm” relevant to a 21st century audience here are four easy tips he should follow:

He has a Sword and Wings? Yes - it's SuperPriest!

What can the Church do to support its faitful flock of customers? For too long the poor suckers in the pews have been taken for granted by the Vatican authorities. Howabout a bit more pizzaz in the services? At least a more edible wafer! Or even some wine that doesn’t taste like it was squeezed from the sour tits of Mother Mary. Any of these things would help keep the Sunday morning worshippers entertained and coming back for more. 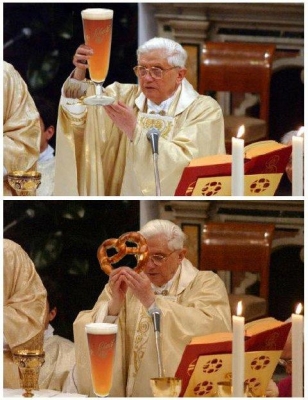 Bentdick pioneered new ways to make Church on Sunday less of a chore...

#3 Preists and their Peckers – What to do?

Christ I don’t know. Just tell them to keep it in their cassocks and away from the prying eyes of today’s nosey social media. 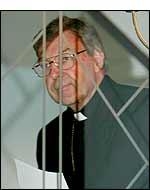 And for fuck sake keep clowns like Pell out of the spotlight! Perhaps send him to a Parish in Tierra del Fuego?

For too long the Church has ignored their greatest asset – the Nuns. These virgin delights have been hidden away in the convents and cloisters for too long. The new Pope needs to get these Women out of their caves and front and centre in any new re-launch of the Catholic brand. Let's have their habits a bit shorter; their headresses a bit tighter, and their legs in stockings and suspenders. His Eminence will be amazed at the increase in Church attendance these small changes could make… And please - don’t forget the kinky wear!

Hmmmm... What does the Mother Superior wear under her habit?

It doesn't take much; all the marketing experts we spoke with agreed that if the new Pontiff followed any of these pointers he could prise the Number 1 religion title form those heathen Muslims.

And, after all, isn't that a goal all right thinking folk will support?

Some Velvet Morning when I'm straight...

Is the hidden hand of Beijing causing Chaos in the West…

My Magic Trip Up The Coast

Jesus Was A Zombie

IT'S CHAOS IN IRAQ!

PREDICTING THE HOUSE – WHAT WILL THE ELECTION 2013 RESULT BE?