It's a very sad world we live in when Sir Paul McCartney and his wife are facing divorce and all anyone seems to want to do is make jokes about her false leg.

Personally, I think it's prosthetic. News reports have confirmed that Paul McCartney has separated from his wife Heather Mills-McCartney. Mrs Mills-McCartney is said to be distraught over the split.
"He has been my crutch for so long!"
She said in an earlier briefing, "I have no idea why this has happened, I'm really stumped"
"She's running around in circles", according to a close friend,
"she will need all the support she can get. It's not like its easy to walk out o­n a relationship like this"
After his break up with Heather, Paul was asked if he would ever consider going down o­n o­ne knee again. Paul said he would prefer it if we called her Heather. It is not known whether a pre-nuptial agreement was signed prior to the marriage. Paul McCartney is o­ne of the richest men in the world, and if an agreement has been signed it is believed that she won't have a leg to stand o­n. Rumours abound over the split which have suggested that infidelity may have been the cause.

"She's terrible" a source stated, "always trying to get her leg over".

Another source has suggested that her battle with alcoholism was the cause.
"Macca couldn't handle it anymore" a friend said, "he would get home at night and find her legless"
Many have attributed this to a problem which started with the present that Paul bought her prior to the wedding. He gave her a new prosthetic leg for Christmas but that was just a stocking-filler.
A miner in Africa has an accident and loses a leg. He says to his mate "I'm f---ed, who will want a o­ne legged gold digger?" His mate says "try Paul McCartney"

Finally a poem by Sir Paul McCartney:
I lay upon a grassy bank
My hands were all a quiver
I slowly removed her suspender belt and her leg fell in the river

These jokes are funny but lets spare a thought for Paul please. Now she has left him, he's going to struggle to find another woman who can fill her shoe.

We all know from the experience of the past few days the massive strength of Israel and its readiness to use this power against the terrorist elements. "The saying goes: those who sleep in graveyards have nightmares." 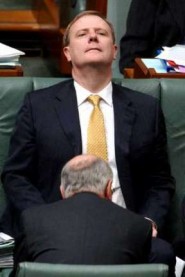 ONE WEEK FROM A DATE WITH DESTINY

Lions toss it away !

SILVER SPOTS BOILED IN FRONT OF MY EYES