Imagine yourself friggin' in the riggin' with dancin' Dave.
He has a cutlass in his teeth and his hairy arse hanging out his breeches.
As your stare up at him in the bright Caribbean sun you feel a rise in your strides...

After a night of debauchery you awake with a gaping smile and a god awful pain between your legs.
Your flaccid member lies limp and direction less.
"Ahoy me mateys"

It’s hard work being a pirate.

It’s Errol Flynn aboard “The Jolly Green Giant”. He is calling from the bridge of his vessel.
“I hear you lads are up for some rogering, mind if I and my crew come aboard?”
Well Errol since when has any pirate been able to resist the sword in your long johns? 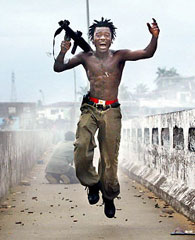 The sighting of the Quarry brought an immediate response from the crew.

Ahh it’s a far cry from ol’ Blighty. Where a man couldn’t be a man with another man. My red hair stands on end just to think about having to go back there. One of Errol’s crew brings out a mortar and pestle and grinds up coca leaves with a dash of rock salt;
“Here take this. Sprinkle it on your old fella…”

Our quarters were most accommodating.

The evening sun went down on that fair and beautiful horizon.