Created: Thursday, 05 May 2005 Written by Pigsnail

Did you see the re-run of that hilarious Stallone movie the other night? Rambo 3? Where the evil Russians attack those poor freedom-loving Afghan mujahadeen? Man, it sure has gained in irony since 1988 when it was made. It's even funnier than that bizarre Green Berets movie John Wayne made during the Yank invasion of Vietnam! As Scott Murray astutely points out in his review of the Stallone turkey, in 1979 the Soviet Union launched attacks inside Afghanistan against Islamic terrorists who were causing mayhem in neighbouring Soviet states.

It was a Soviet pre-emptive strike! But the outraged Yanks called it an illegal invasion to acquire an all-weather deep-sea port, although, Afghanistan was - and to my knowledge remains - a land-locked country!

Yank propaganda portrayed the mujahadeen as brave resistance fighters defending themselves against communist aggression. In this noble cause, the CIA financed, armed and trained these religious fanatics.

Included among the mujahadeen was a certain Saudi volunteer whose name the world would soon know all too well: Osama Bin Laden.

You won't find that in the movie, nor the the part where, once the Russians got kicked out of Afghanistan, the mujahadeen morphed into the Taliban and Al Qaeda.

Maybe there's another sequel in the works? Rambo 4: Stallone converts to Islam, hijacks an airliner and... whoops!!

Fuck off - Right back to where you came from. 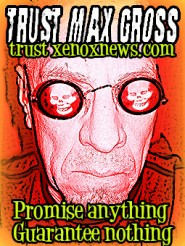 GOOGLE BANS XENOX NEWS - THE END OF FREE SPEECH ON THE INTERNET?

The Voice of the Grunt

IS THERE A NEW ‘HO CHI MINH TRAIL’ THRU IRAN?

XENOX NEWS CONTRIBUTOR'S EFFORTS TO BE MADE INTO MOVIE!