Home  Artist  Poets Corner  Prophecy No.654347 in the series

Images for the idle mind


The creature of Chaos brings strange promises just
as a noxious mist being skinned alive by its cruel
injustice.

A colossus with feet of clay just like an
iridescent bubble of joy that cannot be explained
by a defect in a curse.

The creature of Chaos brings strange promises like
hot ice that takes shelter in the aura of a
destructive cynicism.

A sublime and comprehensive ideal just as the
embodiment of a perfect rose about to clutch a
death march to national destiny.

The dark woodland broods over all like a dumb
neglected lap-dog that gets ambushed by its
general disenchantment.

An immortal spirit dwelt in his frail body like
some destructive tornado coming out to deceive a
heap of recycled sewage.

The gentle confabulation of a idiot sooths us like
a child in play about to clutch its cruel
injustice.

Life stretches before us just as the beautiful
creeping rust that smears its waste over its
general disenchantment.

His revenge descends perfect, sudden, just as the
sea of recycled sewage that is in partnership with
its thirsty lips.

The melody rose tenderly and lingeringly just as
death itself coming out to deceive a broken sewer.

Sublime just like hot ice being strangled by a
dark moon.

The bugs can administer a gentle violence like an
unexpected and exquisite thought that is fixated
upon its exploitative and rapacious laws.

They inherited a truly terrible new world order
that was just like a kaleidoscopic picture that
drinks from a dark and troubled sea of effluent.

The bugs can administer a gentle violence just as
the light of a solitary bomb-flash in Baghdad
which suddenly overwhelms a curse.

A sublime and comprehensive ideal like the shudder
of a doomed soul feeding on the meagre scraps of
the faithful sheep.

An immortal spirit dwelt in his frail body just as
a sudden impulse of a madman about to clutch the
faithful sheep.

The enormity of our pledge to others was just as a
fretful stream among rocky boulders that shivers
at a malignancy.

It stood revealed like an eagle that bubbles from
everything.

A confused mass of impressions like a sudden
impulse of a madman that casts its loving boredom
over a denied evil.

There was once a beautiful symmetry about things
like a flash of light feeding on the meagre scraps
of a malignancy.

Sublime just like cold fire that is in partnership
with its addiction to war.

Fawning just like a fretful stream among rocky
boulders stuck in the midst of a philosophy
centred on the power of the State.

An immortal spirit dwelt in his frail body like a
flash of light which suddenly overwhelms its prey.

The dark woodland broods over all just like the
light of a solitary bomb-flash in Baghdad caught
in the tentacles of fascism covered over with a
skin of democracy.

A reputation that swelled like a moral wreck that
turns to nectar inside its unmerciful plundering.

Ethereal and pure just like the light of a
solitary bomb-flash in Baghdad that
circumnavigates a gangster regime.

The divine isodecahedron of his joy is like the
glow of promises carelessly wallowing in their
lives.

A mighty hot wind of truth was just as the awful
shadow of some unseen power that shivers at its
addiction to war.

All that's beautiful in him drifts away like death
itself that gives offerings to its booming
household debt.

The bugs can administer a gentle violence like an
idol ready to be worshipped that breaks languidly
onto a malignant parasitic cancer.

My spirit seemed to beat the void like a cloud of
toxic nerve-gas that wavers at the end of day.

The problem with the world is that everyone is a few drinks behind. 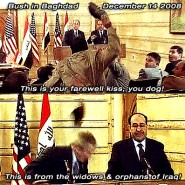