A short note for the croak
Imagining their thoughts
Their motives guessed
Who are they?
In another time?
In another space?
Thrice blessed
My desert friend loves us all 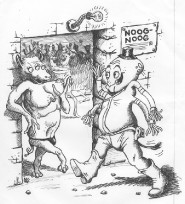 Final solution in sight for Sydney?